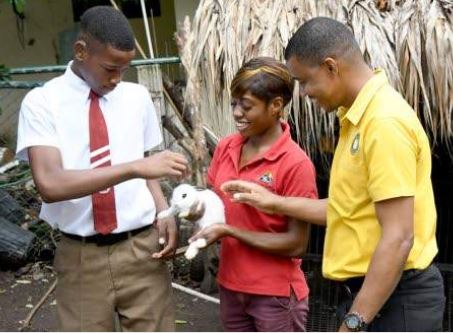 A father’s lifelong commitment to a son in need

There’s nothing Wayon Henry will not do to secure his son Jonathan’s future. In fact, when Jonathan was successful in the Grade Six Achievement Test (GSAT), Henry had no hesitation in leaving his certain job offer to move to another parish for his son.

Jonathan suffers from a hearing problem and at the time lived with his mother in St Ann. He was placed at the Lister Mair Gilby High School for the Deaf in Papine, St Andrew.

Though happy for his son’s success, Henry knew that a life-changing decision was imminent. He had two options — either get somewhere for him to board or relocate to Kingston — as there are no secondary-level schools for the deaf in St Ann.

“So I said to myself, I will not allow him to be at a boarding place where persons abuse him; I want him close by my side so I can monitor his behaviour and I can make sure that he is well taken care of,” he told the Jamaica Observer.

“I was just getting a new job at Sandals that was well paid [but] I gave it up. I had to leave everything, my house, my furniture, my everything, to start all over again.”

“So I jump in the car one day and make it off to come into Kingston. When I reached Faith’s Pen I called my cousin in Kingston and I said to her, ‘I am coming to Kingston enuh and I am coming to your house,’ and she said, ‘call me when you reach the gate’. I went and I called her and I told her of the situation with my son and I started looking jobs,” he recounted.

Life in Kingston was unstable at first as he struggled to find comfortable accommodation and a job. Moving through multiple relatives’ homes, he battled to offer his son a stable life for the first few months.

After a year of searching and living with the cousin, Henry said he was offered a job as a bearer and office attendant. With this new job he rented a small apartment for him and his son, but was forced to move again as “things were not working out”.

He told the Sunday Observer that he went and lived with another cousin, all this time travelling around with his belongings as he wasn’t certain of where he would sleep sometimes.

Things again did not work out with that cousin and he was looking for a way out.

“One day I met someone on the road who said that she had space. She said that she can’t pay her rent because she wasn’t working and the Lord said to her that she would be meeting a guy who has a son that has a hearing problem and that she should take them in, he would pay the rent and they would live there. So I said ‘okay’,” Henry recounted, pointing out that the woman was at this time surprised that he would agree. “It was Thursday in the week, so I said to her I would move and come to the house on Saturday. When I went and told my cousin that I was going to move somewhere else to live, she said ‘ok but if you meet misfortune come back’.”

Though his living condition had been improved and was now stabilised, Henry struggled to communicate with his son.

A co-worker who became aware of Henry’s plight approached him and offered to find out whether the Jamaica National (JN) Foundation would assist his son.

Through continuous dialogue with JN Foundation, a grant was approved for Jonathan to receive hearing aids.

“I was so excited, words cannot express that,” he said as he smiled.

“But the school that he was going, we were living in Central Village and we had to take transport back and forth, so it seemed as if we were defeating the purpose of the hearing aid because he wasn’t wearing it on the street, because he was afraid that his friends might see him in it and persons might take it away for him,”

Henry got word of another school that he thought suited his son better — the Caribbean Christian Centre for the Deaf — and made moves to have his son transferred to the institution in March.

“The same day I went there they gave him a test. He was saying that the test was insulting because it was too simple, but they hugged him and spoke to him and he did the test, and within a few minutes, he passed the entrance test. Then we decided that we were going to leave him there, and the principal and the rest of staff came together and they prayed for us, and they said to me that I should just go home for his things,” he stated.

He told the Observer that he has been comfortable with the change as he believes his son’s confidence has been boosted tremendously.

“At the school where he was before they did not encourage him to wear it, but at this school it’s a part of the school to wear the hearing aid whenever they have it. They are also paying more attention to him, and he is boarding on the premises of the school, and because of this he has got to learn more, and he got to use the hearing aids more,” Henry stated.

“There are a lot more persons at the school who speak to him. So instead of having people just using sign language, now he has more persons speaking to him. Now he is able to hear the words and repeat the words to them that I think is something wonderful, and I am looking for something amazing,” he continued.

Jonathan recently tested his hearing aids at the Hope Zoo in St Andrew, where for the first time he interacted with animals he would have only seen in books and on television.