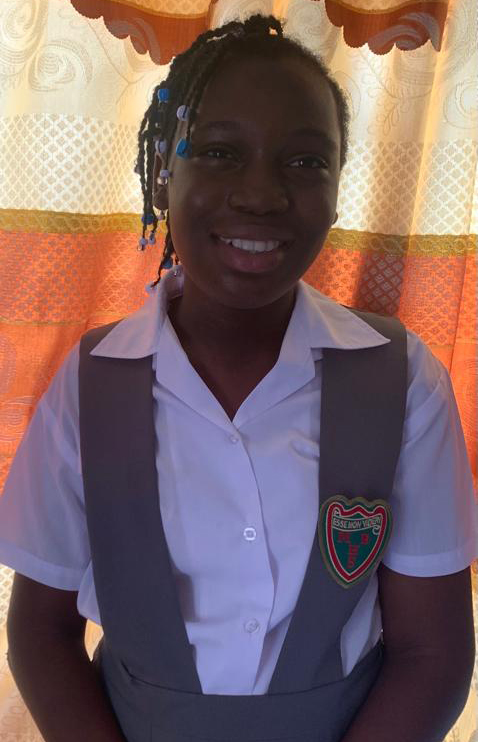 Despite missing online classes for an entire school term because she did not have a device, Almonique Hutchinson emerged the top student in the Primary Exit Profile (PEP) for Hanover.  Her outstanding performance earned her a five-year scholarship from the JN Foundation. She is also the 2021 JN Scholar for the parish.

She was one of 37 children who were officially recognised as JN Scholars during a virtual JN Foundation Scholarship Reception held on September 28.

Almonique, a former student at Bethel Primary who now attends Montego Bay High School in the neighbouring parish of St. James, related that she was reliant on her teacher to send the lessons and audio recordings of the classes to her mother’s phone.  Fortunately, her mother was home daily and was able to facilitate access to the lessons during class time.  As a backup, Almonique regularly followed up with her classmates to ensure that she was fully aware of what took place in class.

“My tablet wasn’t compatible with Google Meet,” she explained, adding that her mother was able to save to purchase a new tablet for the second term.

She pointed out that being absent from her classes made her worried.

“I was afraid that I missed out on something very important and it would come on a test and that I would end up failing the test.”

“For the activities, I do the work in my notebook and take a picture of it and send to my teacher and she would mark it and send it back to me,” she explained.

She also shared that her older sister, Alleca, a fifth form student at Montego Bay High School, pitched in to help her during the time she could not access her online classes.

“She will go above what is expected of her just to ensure that everything is done. If there was any sort of correction, she would do it again because she wanted mastery.  She would say, ‘miss, can I do it again and miss, is there anything that you would suggest that I could do to improve what I’m doing?’. She was also a team player. She would participate in the group work in the WhatsApp group, even though she was not in the class to see what was happening,” Ms Cooper disclosed.

Almonique said when she became aware of the scholarship award, the first person she called to tell the good news was her father, Albert Hutchinson.

For Mr Hutchinson, a mason, the scholarship was timely.  Since the COVID-19 pandemic, he has been working less days per week, due to the reduced demand for his service.  He pointed out that on the morning of PEP, he took Almonique to school, hugged her and gave her some advice on how to tackle the exam.

“Go and execute your best. Don’t rush through the work. Go back through [it] and see if you make any mistake,” he told her.

Almonique’s mother, Omasha Thomas, who is currently unemployed, disclosed that her daughter has always maintained excellent academic performance since basic school.  At primary school, she consistently achieved grades in the 80s and 90s.

“She reads a lot. She would just sit there and read and laugh.  When she’s not doing that, she would be drawing. She draws very well.”

Almonique is aspiring to become a fashion designer or a chef. Like many persons, she is eager for the pandemic to be over soon so that she can return to face-to-face classes.

“It’s very sad.  I have to see the same four walls every day. I get bored,” she bemoaned.

As part of the eligibility for the JN scholarship, the students and/or their parents must be JN members, customers, or clients of The Jamaica National Group for at least a year.   Applications are done through the JN Foundation website. Approximately 550 applications were received through the website for this year’s award.