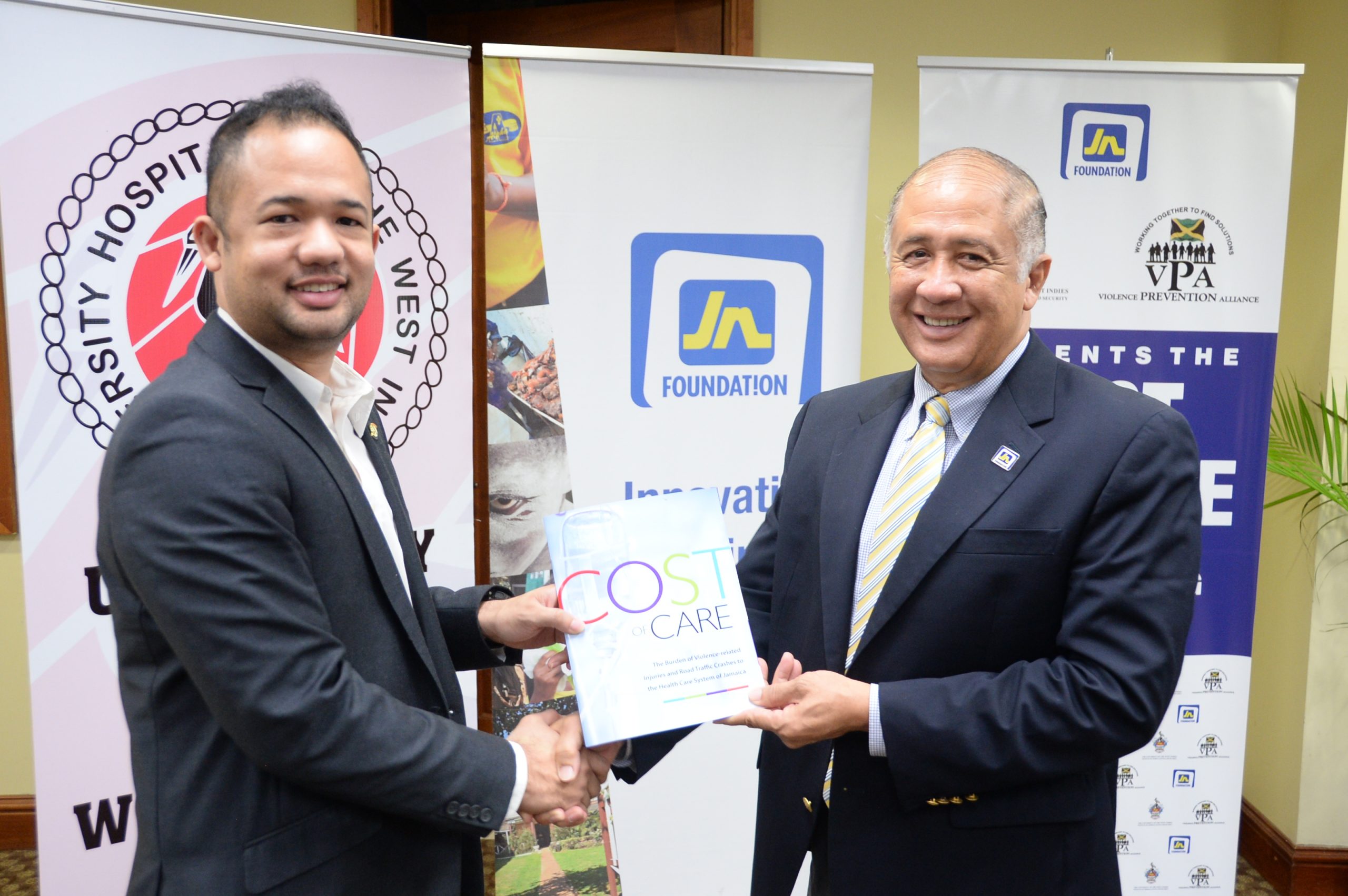 It is costing the Jamaican health sector a staggering $12.6 billion per year on average to cover medical care for persons needing treatment for violence-related injuries and road traffic crashes.
The figure represents 36 per cent of the annual national hospital budget, according to the latest findings of a cost of care study.
The study – consisting of data, collected during the period April-May 2014, which investigated the effect of VRIs and RTCs on the health sector – revealed that in that single year, hospitals across the country managed more than 25,000 cases of violence-related injuries, 13,000 road traffic crashes, and 500 cases of attempted suicide.
The direct medical cost associated with suicide and attempted suicide was $0.4 billion, and the productivity cost was $0.4 billion, resulting in a total direct and indirect medical cost of $0.8 billion.
In addition, it also pointed out that the direct medical cost associated with violence-related injuries stood at $3.6 billion and the indirect cost at $5 billion, while the total medical cost linked with such violence-related injuries was $8.6 billion.
Health minister Christopher Tufton stated that there was no way the health sector would be able to sustain the high level of financing for such care given the insufficient funding of his ministry.
“Public health is underfunded. We have not been able to keep up with the pace of the demands on our public-health system. I don’t think anybody can argue otherwise. I do think it’s important to be truthful and sincere about it,” he said.
“But when you place in context the preventable issues that the public-health sector has to deal with, and according to the study, total estimated cost of violence-related injuries was some 59 per cent of the total ministry of health goods and services, it again brings into sharp focus why issues of prevention, as opposed to curative issues, are key,” Tufton reasoned.
High school students tinker with suicide to solve problems
A cost of care study conducted from April-May 2014 shows that it costs on average $400,000 to treat a gunshot victim, and $190,000, a victim of stab wounds and lacerations. An injury to someone from a blunt object carries with it a cost of $120,000 to access treatment per year.
Seven hospitals were covered in the study: the Kingston Public Hospital, the Bustamante Hospital for Children, the Spanish Town Public Hospital, the University Hospital of the West Indies, the Cornwall Regional Hospital, the St Ann’s Bay Hospital, and the May Pen Hospital.
The study was conducted by the Violence Prevention Alliance, the University of the West Indies, the University Hospital of the West Indies, and the Mona GeoInformatics Institute and was funded by the Jamaica National Foundation and the National Health Fund.
Tufton also noted that while injuries associated with violence and motor vehicle crashes provided a strain on the finances of his ministry, it was telling that there could be another challenge in the form of attempted suicide.

Another disturbing element having an impact on public health care delivery in Jamaica, Tufton said, is the issue of attempted suicide, which was underlined by a national survey undertaken recently by the National Council on Drug Abuse.
This study, Tufton said, revealed that children of high school age tinker with the idea of committing suicide as a mechanism to deal with their problems.
JN Foundation director Parris Lyew-Ayee said that it was important to co-fund the research given its importance to the Jamaican society, as well as the fact that it was in line with one of the long-term objectives of the foundation, which is to enhance health and safety for all Jamaicans.