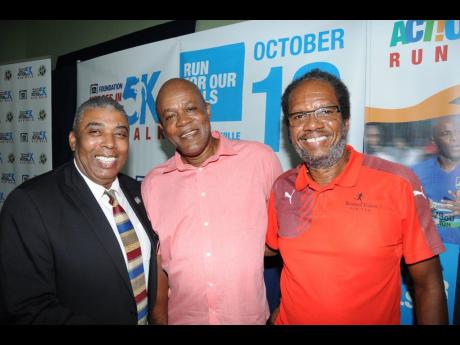 The inaugural Jamaica National Building Society (JN) Foundation Heroes in Action 5K Run/Walk, which will be staged on Sunday, October 18, starting from the Falmouth Pier, Trelawny, has received an official endorsement from the parish’s most famous son, 100 and 200 metres sprint world record holder, Usain Bolt.

Earl Jarrett, chairman of the JN Foundation and general manager of Jamaica National Building Society (JNBS), says the event is being held as part of the 141st anniversary celebration of Jamaica National and illustrates a continued commitment to rural development by the organisation.

“Our choice of Falmouth as the backdrop of our first 5K event is significant as the town’s place as a historic capital in Jamaica “has been solidified by the fact that it had piped water before New York City and still stands as one of the Caribbean’s most well preserved Georgian styled towns, with its rich architectural detail.”

The event, which is targeted to raise funds for the Granville Place of Safety for girls, located in Garrick Foyle, Trelawny will contribute to the construction of a building, which will house a classroom, a media library and sewing room.

Jarrett acknowledged that the endorsement of the event by Bolt and the Usain Bolt Foundation is a positive indicator of the constructive impact that the event is expected to have, “not only on the lives of the residents of the Granville; but, also in the town of Falmouth and the parish of Trelawny.”

“Usain has championed the pursuit of excellence throughout his dynamic, world class track and field career; and, has demonstrated his willingness not only to be a positive role model; but, also, to give back to his community in meaningful ways. We are, therefore, pleased that he has chosen to partner with the Foundation in the 5k event in Trelawny,” he said.

For his part, Usain Bolt said “I am always happy to be a part of any positive venture that gives back to my parish. I know the people of not only Trelawny; but, the entire Jamaica will come out and support the 5K.”