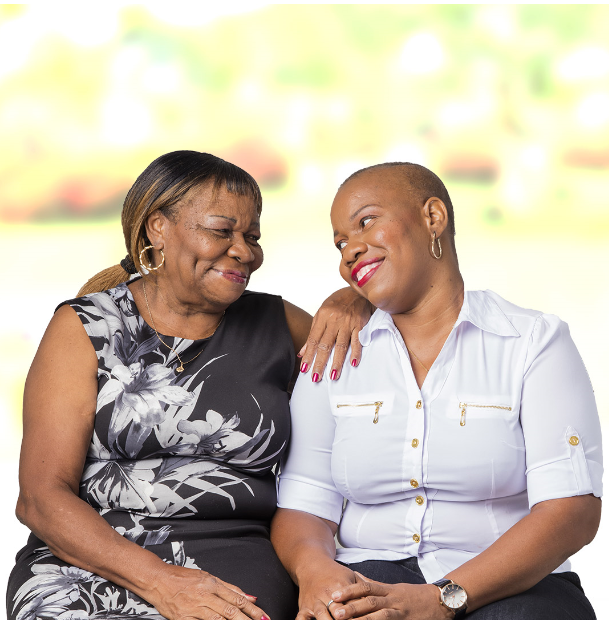 The love of her family, her faith and the inner strength to keep living for her three children, made Michelle Robinson relentless in her fight against breast cancer, a diagnosis she received a year ago.
The 36 year old said that she knew something was wrong when she started to feel a pain in her left breast, which she ignored at first, however, the pain persisted.
“It was on Mothers’ Day and I was with my eldest son. We were watching a movie and I felt the aches,” she related during a #JN PowerofPink Think Tank Session:  Beyond Breast Cancer: Stories of Survival, on Miss Kitty LIVE ON Power 106, recently.
The educator said that on further self-examination, her fears were confirmed. “Later on, I decided to squeeze it, and I saw this brownish discharge emerging from one of my nipples. It was a shock for me, I held my son and started to cry.”
However, it was after visiting her doctor and doing an x-ray that she received the formal diagnosis. She had stage two breast cancer. That meant the cancer was growing and had extended to the nearby lymph nodes.
“I was devastated by the news, but, at the same time, because I know how God works, I decided to ‘take it to the Lord in prayer’ and that has been my mantra since the diagnosis,” she related.
She broke the news about her illness to her family members, who were downcast; and she realised that she had to be strong for them, as well. “The diagnosis was like a curve ball, but I was determined to keep batting,” she said.
Michelle immediately commenced her treatment, which involved surgery to remove the left breast and chemotherapy nine months later. She said the chemotherapy brought on nauseous feelings, loss of her eye lashes, hair, loose bowels, discoloured nails, and left a metallic taste in her mouth. So far, she has done 16 chemotherapy sessions and hopes that at her next doctor’s visit she will not have to do any more treatment.

However, the diagnosis forced her to change her lifestyle. An introvert by nature, whose life simply involved going to work and home, Michelle decided that she would start enjoying life, therefore, she began to participate in activities which she enjoyed.
“I found a new lease on life. Occasionally, I would go out and play pool, and I started to look at life totally different. Now, I am more comfortable and at peace,” she said.
The loss of her hair was another stage of the cancer which she had to embrace. She opted not to wear a wig and accepted her baldness. That decision not only motivated her; but encouraged other women affected by the disease.
Michelle was also forced to change her diet. As a result, she reduced her sugar intake; increased eating fruits and vegetables; as well as, eliminated red meat, processed foods and alcohol, in her diet.
“It was life changing,” she related, “One had to make so many changes, and it was not for one month or two months, but for a lifetime, and the change was immediate.”
But for Michelle, her journey has been bearable, because of her faith in the Lord and the strong support from her family members, who have been ‘her shelter in the time of storm.’ She highlighted the close bond with her mother, Catherine Knight, who kept her persevering.
“We now appreciate each other so much more. The thing is that, we don’t know how long we will have with each other, therefore, one needs to embrace every moment you have together. Tell them you love them and hug them,” she said with a pensive look.
“When you are faced with so many challenges being diagnosed with cancer, if you don’t have that support, it will make you give up easily. But, when you have support, it will make you press on,” she informed.
On learning about her daughter’s illness, Ms Knight said she was shocked. But, as the shock wore off, she supported her daughter, the last of her four children.
Last year, 974 women were diagnosed with breast cancer in Jamaica. Data from the Jamaica Cancer Society also revealed that approximately 60 per cent of breast cancer cases diagnosed in Jamaica are among women between the ages of 25 and 59 years.
The #JN Power-of-Pink Think Tank Session was the second in a three-part series of conversations about breast cancer, which was part of The Jamaica National Group’s campaign to raise awareness about how to prevent breast cancer and educate them about the symptoms, early detection and treatment.