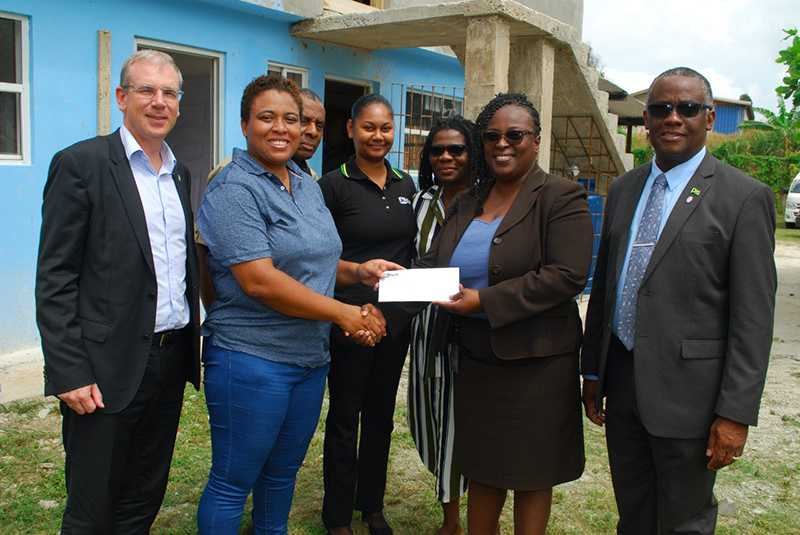 Candle in the Dark Continues to Burn for the Homeless Centre

Registered charity organisation, Candle in the Dark Care Centre, which caters to the needs of the homeless in Mandeville, Manchester and its surrounding environs, had its infrastructural capacity expanded, courtesy of the JN Bank Member Advisory Council (MAC).

Chairman of the Centre, Wendy Freckleton, said assistance was also provided by JN Fund Managers and JN Small Business Loans, member companies of The Jamaica National Group, as well as other organisations. This, she said, has allowed the charity to complete construction of the upper level of the shelter’s existing structure, which will provide a temporary dormitory during the rehabilitation of the homeless men and women who have been victims of abuse.

“Their contribution was able helped to construct the shelter, which is now almost completed,” she informed, noting that it has also been tiled and doors and rails to the shelter installed.

At the Candle in the Dark Care Centre, two meals per day are delivered to over 50 clients between the hours of 8:30 a.m. to 3:00 p.m. These persons include drug addicts, ex-convicts, the mentally challenged, the poor and the destitute.

In addition, they enjoy separate bathing facilities and are provided with a change of clothing and footwear, wherever possible. During the meals, the clients are ministered to spiritually, emotionally and mentally.

“What we are doing at Candle in the Dark Care Centre is take care of the poor, indigent and the homeless. We have fortunate to have the facility where we can serve the poor and destitute of the community,” she said.

Alethia Peart, business relationship and sales manager for Mandeville, said that JN Bank and its member companies were happy to assist the organisation.

“The Candle in the Dark Care Centre should be commended for the work it has been doing over the years in assisting the homeless. The Jamaica National Group is proud to have assisted in expanding the structure of facility. There is no doubt that it will be beneficial to the homeless,” she said.

Candle in the Dark is an organisation which was started 25 years ago by Dr Arthur Reid and his late wife, Jennifer. As ministers of religion, spiritual and emotional sustenance were included as a hallmark of the service to the homeless.

Since 2004, they have cemented the organisation’s home at Caledonia Road with a building provided by Kiwanis International after a 49-year lease-deal made with the National Land Agency.