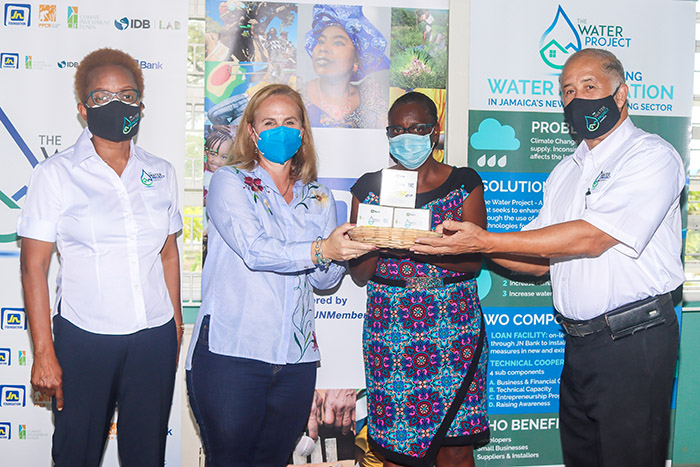 Nearly a year after it implemented water-saving devices and a rainwater harvesting system, the Wortley Home for Girls in Kingston has realised a reduction in its water consumption and savings in its monthly water bill.

“It has reduced our water bill by at least 50 per cent,” said Delories Bailey, manager of the Wortley Home for Girls, as she explained that the connection was made to their laundry system and the water efficiency kits were used for the shower heads and bathroom.

“When the tank is full, we are good to go for the laundry. We can get up to two weeks’ of washing out of it. However, when that is finished and we don’t get any rain, we have to revert to using the water from the National Water Commission (NWC). But overall it has saved us quite a bit,” she disclosed.

Ms Bailey underscored the importance of the rainwater harvesting system, which she said is essential given the cost of water, which is expected to increase according to the NWC, due to rising global energy costs, being worsened by the Russia-Ukraine war.

“I would certainly encourage persons, especially other children’s homes that have a large population to implement this system. You have to monitor the water and that is how you see the savings. So, the homes that have 50 or more children, should implement the rainwater harvesting system and they would see some savings,” she explained.

Claudine Allen, General Manager of the JN Foundation, said the system was donated to the home in an effort to implement water adaptation measures and encourage efficient water usage. The initiative was implemented under Water Project Jamaica, which was started in 2017, as a joint collaboration with the  JN Bank, the JN Foundation, the Climate Investment Funds (CIF), the Pilot Program for Climate Resilience (PPCR), the Inter-American Development Bank (IDB) and IDB Lab.

Ms Allen said the March 22 announcement by the Wortley Home was timely, as the world observed World Water Day under the theme Groundwater: making the invisible visible.

“In observance of this year’s World Water Day, we want to emphasize the value of water, whether in homes, schools or communities. We want everyone to take the message of water conservation and efficient water use as a part of valuing water. The evidence is there as our donation to Wortley Home for Girls has increased its efficient use of water and decreased the burden of high bills,” she pointed out.

Rainwater-harvesting systems capture rainwater by directing it from large surfaces, for example, roofs, to an underground or over-ground holding tank. The harvested rainwater is filtered and then pumped directly to the appliances or to a header tank. Domestic or commercial applications include flushing toilets. The home will use its system to reduce water consumption primarily in the laundry area.

The Wortley Home was established by the Anglican Diocese in 1918 to provide a home and a safe space for girls ages seven to 18. The institution was recently rebuilt following a fire in 2015, and now provides a loving environment and Christian upbringing for 14 girls, from a variety of backgrounds.