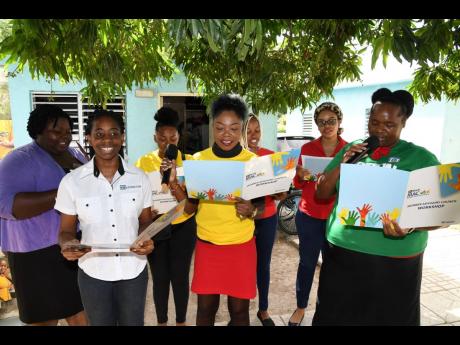 Whether you’re one or 92 years old, for many of us, Christmas often conjures up childlike sentiments.

And those feelings emerged in the form of ‘hilarious tall tales’ from a group of golden agers recently as they were treated to lunch, presented with gifts, and enjoyed a mini concert hosted by The JN Foundation and its ACT!ON volunteers at the Golden Age Home in St Andrew.

The golden agers reminisced about their family gatherings, childish pranks and, of course, the traditional Jamaican cuisine they enjoyed in their youth. They recalled not only sorrel and fruit cake, but also red herring and ‘jontono’ bread, an alternate pronunciation for ‘joined-up’, as the product was characteristically formed from three breads joined together. In addition, there was ackee and salt fish, jackass corn (a hard biscuit made primarily from coconut), and other traditional Jamaican delights.

“One time, me tief out the whole of the middle of the biscuit,” 101 year-old Cybil Francis recalled, as her mind took her back to Christmas when, as a girl, her mother would bake trays of coconut biscuits (jackass corn) and serve the sweet treats with some traditional chocolate tea. “And me get a good whacking fi tief out the coconut business,” she said, to peals of laughter.

JONTONO BREAD AND RED HERRING
Another resident, Claude White, recounted an even more detailed and funnier trip with an uncle as they travelled by donkey on an errand for his grandmother, with whom he lived, to get some jontono bread and red herring for Christmas.

“Him go to the front and me at the back (on the donkey) and me pinch the bread. Then him buy herring and put it in the basket. Me pinch the herring and eat it with the bread and it sweet me!” he recalled, with much laughter.

By the time he got home, only about half the bread remained. But lucky for him, his grandmother did not scold him.

The stories kept flowing and grew more interesting as the seniors tried to outdo each other.

A ‘ram goat’ being used as a horse or mule? Gladstone Kerr was the next to tell his tale. He told of how he ended up with four stitches one Christmas following one of his boyhood meanderings.

“My father was a butcher, and two to three weeks before Christmas him always go around and get the biggest ram goat to buy (which was slaughtered for meat that was most often curried or used to make ‘manish water’ soup), and my duty was to tie out that ram goat (in the mornings) and carry it in at evening time,” he recalled.

However, young Gladstone decided to make an adventure of his daily chore and he made a collar for the goat.

“I jump in the back (of the goat) and ride it go bush and when I coming in the evening, I ride it in again,” he gleefully related.

Then one evening, he decided to take things a little further.

“I made a little cart. I sat in the cart and tied the goat to the cart. There was a deep corner with a gully. Me whip the goat and when him take the corner, the rope that I tied to the cart burst, and me end up down the gully and 10-penny nail run in my foot, and four months I couldn’t go to school,” he recalled.

For young Gladstone, it was a lesson learned, albeit a painful one, but one he could now relate with humour.

The stories continued from the 69 senior citizens that afternoon as they clamoured for the opportunity to not merely walk or jog, but to run down memory lane, eating and singing belove