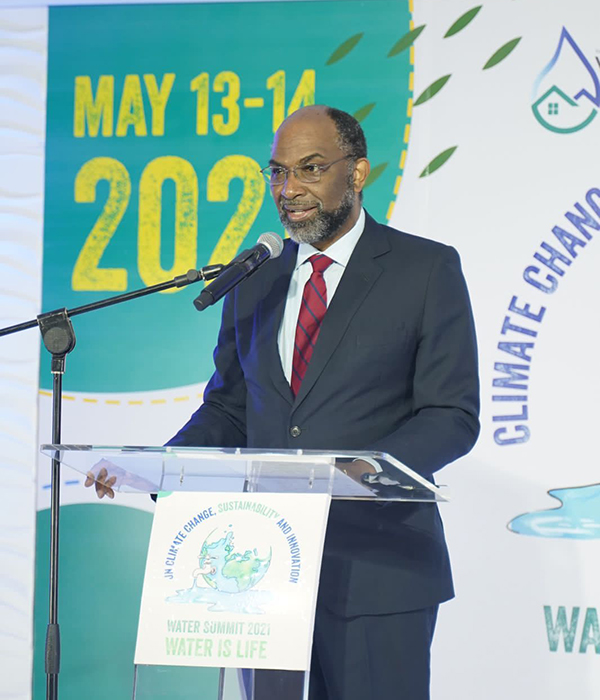 The Hon. Earl Jarrett, Deputy Chairman and Chief Executive Officer of The Jamaica National Group, considers that proper planning is needed to meet the country’s water needs, which he said, have been outpacing supply.

“It is inevitable that, without action, the country will not be able to meet its water needs. We must, therefore, find ways to change certain outcomes,” he said, and pointed out that the government has been doing well in wastewater management.

Mr Jarrett made those observations while addressing the JN Foundation’s Water Summit, which was held virtually, May 13-14, under the theme, “Water is Life.”

He said that the country’s water resources were under threat from climate change, development and a growing population. In addition, he pointed out that Jamaica’s water resources also generally cater to the needs of an additional two million persons annually, who visit the island, as tourists.

Mr Jarrett explained that one of the objectives of the Water Project Jamaica, which is being implemented by the JN Foundation and funded by the Inter-American Development Bank, is to engage citizens to become guardians of water resources, by being part of the movement to conserve water.

He said the project’s mandate include educating the Jamaican population to implement water-conservation methods in their homes, with the use of high efficiency toilets and faucets; and to purchase efficient washing machines; as well as, the harvesting of rainwater for domestic use.

The JN Group CEO said the project has also engaged developers to use strategies and techniques in the design and construction of homes, which includes rainwater harvesting and water saving faucets.

Citing other successes of the project, Mr Jarrett noted that householders in nine communities in Kingston & St Andrew, were engaged through a 12-month pilot study, where their homes were retrofitted with water-saving devices, which monitored their usage. He said that the results of the pilot study was astounding.

Some householders, he pointed out, achieved a reduction of up to 42 per cent in their water usage, following the installation of the water-adaptation devices; and the implementation of water-saving measures within their homes, during the past several months.

He informed that a Memorandum of Understanding was also signed earlier this year with the University of Technology, Jamaica, to forge a partnership, which will train more persons in water adaptation, as one of the solutions to address the country’s drought challenges. The partnership will include the development of a course, to certify persons for careers in Water Adaptation and Research, relating to rainwater harvesting and grey water recycling.

Mr Jarrett commended the JN Foundation for organising the Water Summit, which he said, had brought key stakeholders to the table, to discuss solutions to the country’s water challenges.

The summit was organised by Water Project Jamaica, which is being administered by the JN Foundation.