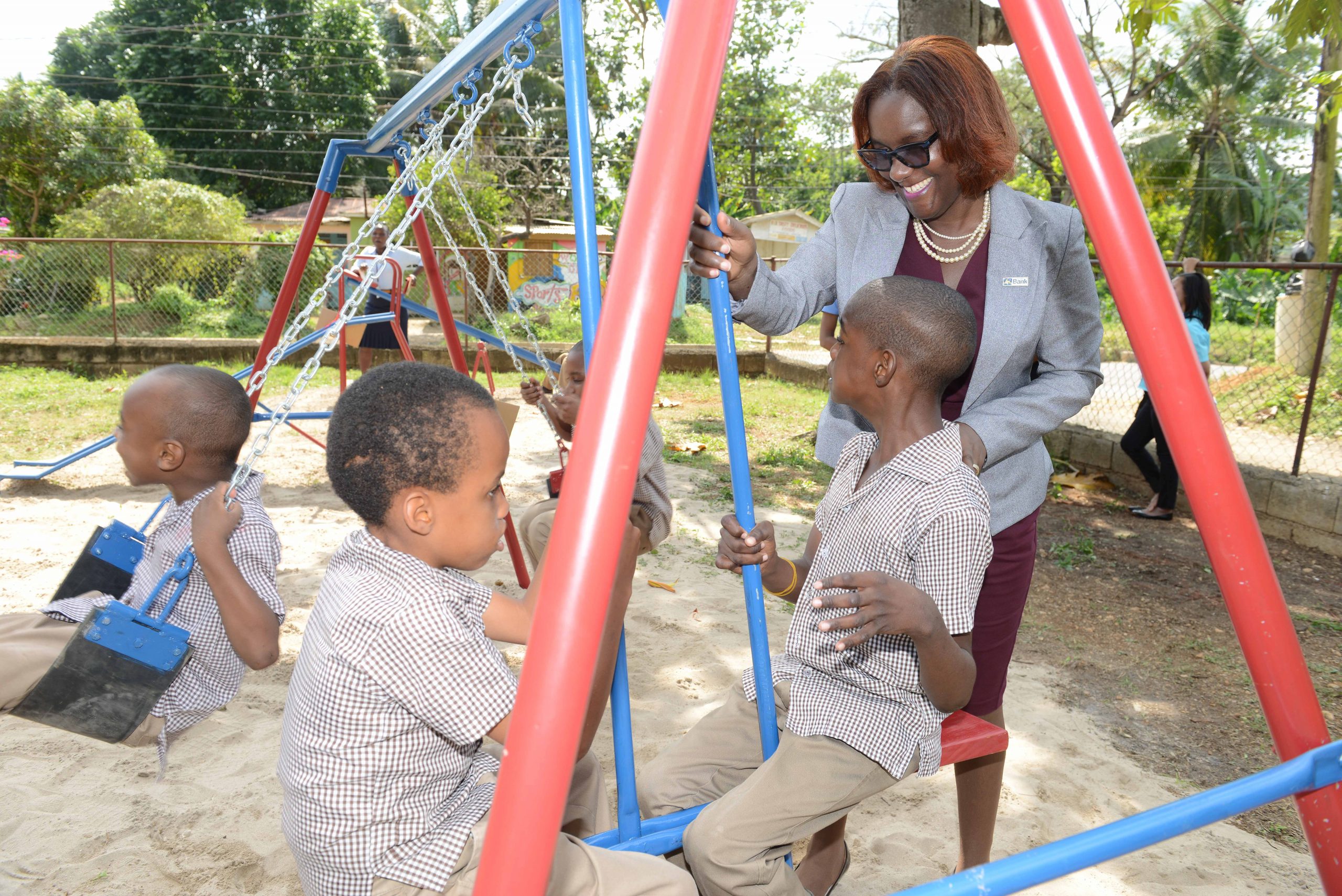 Bright, broad smiles and peals of laughter emanated from the students of the St. Elizabeth Early Childhood Education and Therapeutic Centre in Santa Cruz, St Elizabeth, as they enjoyed play time in a new therapeutic play area, which was constructed courtesy of the JN Bank Member Advisory Council (MAC), in Santa Cruz.

The play area, outfitted with a monkey bar, slide, seesaw and a swing, was officially handed over to the centre on February 4. The centre caters to children with disabilities, therefore, the play area enables the youngsters to develop a higher level of interaction, through structured play, in a safe and secure environment.

Madge Sanderson, centre manager of the institution, in expressing her appreciation for the gift, underscored that the play area was important, as it facilitates the development of the children.

“We were not able to have our children playing as we would want them to, as play for them is therapy. Therefore, now that we have these equipment, they will help them in their development, balance and cognition, as well as, to build their muscles,” she said.

Lorna Sinclair, business relationship and sales manager for St Elizabeth at JN Bank said that due to financial challenges experienced by the institution and the need to assist students with disabilities, JN Bank MAC decided to help.

“When we visited the school, we recognised that there was a need. Yes, the students do have disabilities, however, we do not want them to be cloaked up inside every day, all day long. They needed to be outside playing and enjoying the sunlight. With the new play area, now they are more active,” she informed.

Mrs Sinclair stated that the financial institution also engaged community members, not only through the provision of financial services, but also by investing and building the communities and having an enabling presence in the communities.

Children between the ages of one to 16 years are enrolled at the centre and they are from the communities of Santa Cruz, Burnt Savanna; Knoxwood, Pepper, Goshen Middle Quarters, Waterloo Community and New Market.

Established in 2006, the centre initially started doing home visits to children who resided in nearby communities, who were physically challenged. Ms Sanderson informed that this approach to therapy was not productive, therefore, the administration recognised that more contact time was needed with the youngsters.

Eventually, a school offered services for three days per week and since November last year, it has been operating five days per week due to additional funding.

The JN Bank MAC, formerly known as the “Branch Advisory Councils,” were established in 2006, to provide JN members with the opportunity to engage directly in the identification and selection of projects to positively impact negative issues in their communities.
Over the years, the MACs have implemented numerous worthy projects in communities across the country. With the establishment of the JN Circle, the activities of the MAC will now be subsumed into the JN Circle, a national network of service clubs. The new entities are empowered by The Jamaica National Group to advocate for change and strengthen the communities in which its bank and other JN corporate entities are located.