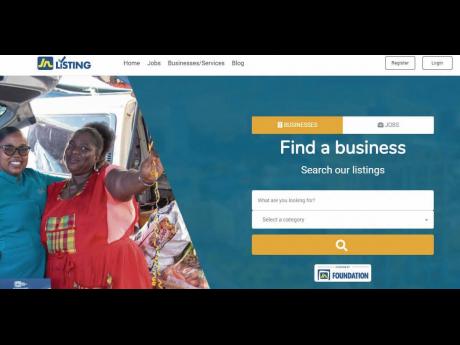 As the country navigates this period of unprecedented health and economic challenges, the JN Foundation has launched a new resource to offer support to Jamaicans – individuals and businesses – in need of support during the COVID-19 pandemic.

The new website, www.jnlisting.com, is targeted at more than 600,000 JN members and strives to bring together persons seeking jobs and employers and also provide a space for micro and small businesses to promote their products and services.

“As an organisation created to support people to navigate difficult times, we have designed this facility to assist Jamaicans, who have been particularly displaced, so that they can create their own opportunities and regain their independence,” general manager of the JN Foundation Onyka Barrett Scott said.

The site comes amid grim projections by the Bank of Jamaica, which revealed in August that the economy would contract between seven and 10 per cent this fiscal year, significantly above the four to seven per cent it had initially forecast.

Its predictions were supported weeks later by the Planning Institute of Jamaica, which forecast a decline of between eight and 10 per cent in output for the financial year as it acknowledged a devastating 18 per cent decline in output for the quarter ending June when compared to the same period in 2019.

Unemployment is also predicted to increase to between 10 per cent and 12 per cent, up from the relative 7.5 per cent rate of 2019, the Bank of Jamaica said.

Making meaning of the data, a study released in September by the Caribbean Policy Research Institute found that 80 per cent of households had lost an average 46 per cent of their income since restrictions began in March.

“These are not ordinary times. There are many families and households which are experiencing severe challenges due to the fact that breadwinners are no longer earning. Some have lost their employment while many others have experienced significant reductions in their income, and our state agencies predict that the road ahead of us is going to be very difficult. Therefore, to rise again, we must support each other,” Barrett Scott said.

She explained that JN Listing would be rolled out on a phased basis, initially targeting small and micro businesses.

“In the second phase, JN member companies and businesses which we serve will have the opportunity to post available jobs on the website. Job seekers will also be able to upload their résumés for potential employers to access,” she shared.

Persons will be able to search for opportunities on the website by parish or by category.

“The site is easy to navigate, and we believe that it will provide a wealth of valuable information and become a meaningful space for persons to find opportunities,” she pointed out.

Other resources on the website include information to assist users improve their financial literacy, calculators, and career materials.

“We are aiming to create a holistic space where persons can be empowered to manage their finances, and we will also be providing career resources to assist persons to become better informed professionals,” Barrett Scott affirmed.