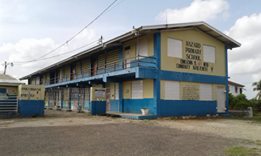 Hazard Primary School in Clarendon will benefit from improvements to its road infrastructure, with enhanced safety for students commuting to the educational institution.
The upgrading will be implemented by the JN Foundation, in collaboration with the United Nations Children Fund (UNICEF)and the FIA Foundation.Under the project, “X Marksthe Spot,”a Crosswalk Road Safety Campaign, the school will benefit from the erection of signage for bus lay-bys, pedestrian gates, as well as, the widening and paving of sidewalks.
Winsome Atkinson, acting principal at Hazard Primary,said she was elated that her school was the first to be selected by the campaign and welcomed the planned work to improve the safety of students and adults.
“We appreciate that JN Foundation thought about Hazard, because we are actually midway between Mineral Heights and May Pen Town, therefore, we are located along a busy thoroughfare. I’m happy, because it will improve the safety of our students,” she said.
Mrs. Atkinson informed that the school had experienced several accidents at its gate, though to date none were fatal. “I know that the proposed improvements will enhance safety for our children and the members of our community,” she pointed out.
Onyka Barrett Scott, acting general manager of the JN Foundation, said that the work at Hazard Primary School was being facilitated under a broader initiative, the Child Road Traffic Injuries Prevention (CRTIP) project, to address the road safety crisis in Jamaica; and that, the X Marks the Spot Road Safety Campaign falls under CRTIP.

“The CRTIP intervention seeks to improve the safety of children travelling on roads, particularly near to, or on their way to schools, through research, advocacy and evidence-based interventions,” she explained.
Elements of the X Marks the Spot Crosswalk Campaign include: conducting a baseline assessment to determine the state of road safety within chosen school zones, infrastructure assessment, upgrading of a number of features aimed at improving safety around the school and advocacy.

The projected school improvement should be completed for school resumption in September. “We are indeed happy to be implementing the X Marks the Spot Crosswalk Campaign as we see clear benefit not only for our nation’s children but also the communities in which our members reside,” she added.

“The project successfully brings together several government and non-governmental stakeholders, including: the Ministry of Education, Youth and Information, the National Works Agency, the Ministry of Transport and Mining, the Road Safety Unit, and the Jamaica Constabulary Force, among others,”Mrs. Barrett Scott informed.
Established in 1962, Hazard Primary School has a population of approximately 600 students, inclusive of the Special Education Unit and a complement of some 27 teachers and nine ancillary members of staff.

Academically, the school holds its own in the Grade Six Achievement Test (GSAT), and this yearstudents were particularly successful,as most of them passed for entry to traditional high schools.
Mrs. Atkinson stated that the studentsalso excelled in sports; and, it’s Special Education Unit competes annually in the Special Olympics. Students at Hazard Primary also actively participate invibrant 4- H and Environmental Clubs.