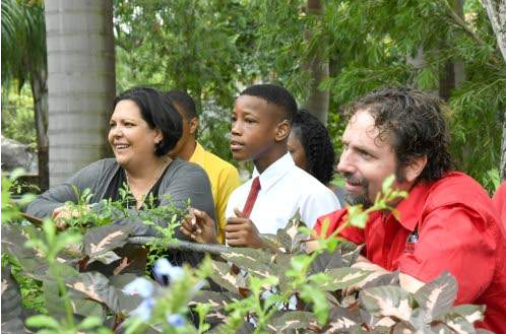 It was an extraordinary day for Jonathan Henry on Friday as, for the first time in his life, he was able to hear animals.The 16-year-old lost his hearing at age two after what his father suspects was a case of negligence at birth.

“What happened was that he was born and diagnosed with jaundice and, apparently, the doctors or the nurses didn’t detect it until we took him home and noticed that he was looking pale and we take him back to the hospital,” Wayon Henry, Jonathan’s father told the Jamaica Observer.

“They had to do a blood transfusion and he caught a cold, so they had to treat him with antibiotics. We didn’t get a doctor to spit it out to us like this, but a doctor that check him up over by Bustamante Hospital said to me that what happened was that it seems as if he had gotten a double dose of antibiotics and that is what push out and burst the inner ear,” he continued.

He noted that after this incident, the parents “would see fluids coming out of the ear” whenever Jonathan lay on his side. His son, he said, would also cry that his ears were hurting.

According to Wayon, a doctor at another institution told him that the fluids he saw were “supposed to collect the sounds, and told us we should think about getting him to a sign language school”.

Jonathan’s hearing gradually depleted and at age two it was at its worse. With one other child to care for, the family were not able to get Jonathan hearing aids at the time.

But last year — roughly 12 years after he lost his hearing — the Henrys saw a glimmer of hope when the Jamaica National Foundation learnt of Jonathan’s story and purchased two hearing aids that he needed.
“It’s a wonderful experience. It is so amazing to know that after going through all these struggles with him and now…to know that he has been granted the hearing aid. I can speak to him verbally instead of making signs; it’s really good. I’m just giving God thanks; it’s just such an awesome feeling,” Wayon told the Observer with a broad grin.

On Friday Jonathan tested his new devices at the Hope Zoo in St Andrew. The thrill of the experience could be easily observed as Jonathan heard, saw, and interacted with the animals he would only see on the television and in books.

Carried around the location by various employees, Jonathan’s exclusive tour mainly focused on various birds — the most vocal animals. His most memorable part of his tour was his time feeding the Budgies.

“I look at the different kinds of birds and I saw the different colour birds, and they have different voices and I heard their voices. When I got the food, they were called, and they would come down,” Jonathan told the Observer through his interpreter and teacher, Dorothy Williams.

He attested to learning much more than he had known about animals, one of such lessons being that birds communicate with each other through different “voices and callings”.

“I look at the different colour birds, I said how come they have different colours. so I watched them and I said wow, there were big birds too. I saw the ostrich and I looked at the ostrich, and I was thinking that they can run fast. if I had one like that and stole his egg and ran, what would they do to me? they would run fast; that would be like in a movie,” he said with a snicker.

He noted his fascination with the snake, the zebra, the deer, and monkeys.

“I saw the goat with the big horn. I saw the woman goat and I saw the man goat. They were just looking so cute and I just looked at them,” an elated Jonathan stated.

The day’s events were also exciting for JN Foundation’s General Manager Saffrey Brown who, along with zoo employees, worked to ensure Jonathan’s comfort.

“What we wanted to do was really kind of expose him to all the wonderful sounds out there, and we felt that Hope Zoo — which is such a beautiful space now with the really incredible animals — is a really good space to do that. So we brought Jonathan here today (Friday) to listen to the animals, for him to hear all the different sounds, to hear the different pitches. It’s really an absolutely wonderful day,” she said.

Now a member of the JN Foundation family, Jonathan will be monitor and benefit from speech therapy.

“We’re making sure that Jonathan is okay. He is now at the Caribbean Christian Centre for the Deaf; we’re trying to make sure that he gets proper access to employment programmes. We do a lot of work with Deaf Can!, which is again about employment for young deaf communities. so we’re going to make sure that Jonathan gets access to that kind of programming and that kind of opportunity to live an extremely independent life,” she noted.

“Over the next year or two we’re going to work with him in terms of a speech therapist to try to make sure that as his hearing returns so too does his ability to communicate effectively verbally. Truth is, he is part of the family now and families stay together.”