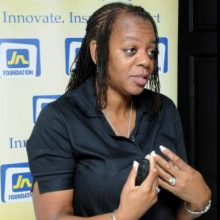 The inability of some principals to properly manage human resources (HR) in their schools is being highlighted as one of the many reasons for the poor performance of students in these institutions.

Many experts have been urging principals to treat their schools as if they were actual corporate businesses in order to improve efficiency and performance, but despite the clear benefits to be derived from this, facilitators of the JN Foundation’s iLead educational programme say most schools leaders lack the necessary skill sets that are important to manage people.

“Schools don’t have a human resources department or unit, and most of the school leaders have to manage HR issues without the skills to deal with people problems,” said Gillian Chambers, human resource professional and leadership consultant to the iLead programme.

According to Chambers, some school leaders have developed the skills on the job but more needs to be done.

It was against that background that the management team of the iLead programme, being conducted in conjunction with the Ministry of Education, recently trained principals and school leaders from participating schools in Portland, St Mary, and St Thomas, to manage the human resource issues within their schools.

“School leaders must coach, mentor and motivate their teachers effectively; treat with issues of trust, as well as manage conflict,” said Chambers, who has been holding a series of training sessions for principals, vice-principals and heads of departments from the newest participating schools in the iLead programme.

These schools are the Martin Primary and Retreat Primary and Junior High schools in St Mary; Windsor Castle All-Age and Happy Grove High in Portland; as well as the St Thomas Technical High Schools.

The other schools under the programme are Port Maria Primary, Horace Clarke High and Brimmer Vale High schools in St Mary; Buff Bay Primary in Portland and Robert Lightbourne in St Thomas.

During the sessions, principals and heads of departments highlighted problems they encounter on the job, agreeing that it was sometimes difficult to effectively coach staff and identify what motivates them.

“I have had issues with teachers who have not been performing as well as they can, but I recognise there is also the need to improve my coaching techniques,” admitted Claudette Brimm-Layne as she expressed appreciation for the training intervention.

Responding to the issues raised, Chambers argued that the school leaders need to be intrinsically motivated.

“And, from there, they can create the environment for others to feel motivated and inspired.”

“You can’t decide by yourself. Create a committee,” she advised. “Take a member of the ancillary staff, a teacher from each department, and so on. Then let them sit together and identify what motivates each person; and use that as your guide,” said Chambers.

The leadership consultant further argued that it is important for leaders to gauge expectations; and to plan for them so that staff members don’t develop ill feelings about the rewards process, which could result in conflict, she added.

Esther Tyson, iLead’s school improvement coach, agreed and added that when rewards systems are established, school leaders need to be perceptive and ensure that the system is fair.

“Separate the professional you from the personal; and be consistent across the board when you apply rules and standards,” she advised, referencing her experience as principal at the Ardenne High School in the Corporate Area.

According to Tyson, being fair, transparent and consistent in applying rules and standards was also an important way to build trust.

She said school leaders to document issues and not leave them “up in the air.”

Tyson also encouraged the school leaders to involve a third party where necessary and to be very transparent in their actions.

“There are some people you should never talk to alone. Lay all the cards on the table, so that it’s very clear to the parties involved where you stand. There should never be any ambiguity where you are concerned,” said Tyson.