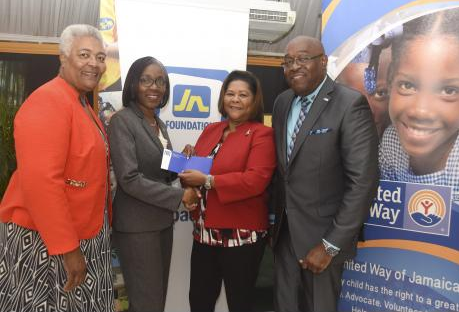 Caribbean countries that were devastated by hurricanes Irma and Maria during the recent hurricane season will benefit from donations received through the JN Foundation’s ‘Help Our Caribbean Neighbours’ campaign, which was mounted on its ISupport Jamaica funding site.

The campaign, launched in October, resulted in members of the public and employees of companies and organisations in the Jamaica National Group donating to the cause.

Rose Miller, grants manager at JN Foundation, who officially handed over the contributions to United Way of Jamaica on Thursday, December 21 at the Terra Nova All-Suite Hotel in St Andrew, commended persons who responded to the campaign.

“We are grateful to those who contributed, having seen the need to reach out to our Caribbean neighbours. We are always seeking opportunities to help others.The Jamaica National Group plays an integral role regionally, therefore, we endeavour to reach out when there is a need,” Miller said.

Winsome Wilkins, chief executive officer of United Way of Jamaica, expressed gratitude to the JN Foundation and members of the public who supported the campaign.

“Our thanks to JN Foundation, which is a serious partner with us in the voluntary sector. We value their support,” she said, explaining that the funds will be merged with a larger pool of funds to be used in the rehabilitation and restoration process and help families in those islands to pursue economic activities.

“There is a pool of funds that will be allocated to the Salvation Army and to the Adventist Development and Relief Agency, which are already on the ground doing work, and identifying the families that would benefit,” she said.

Wilkins said that the campaign, organised by United Way across Jamaica, has already received some $3 million in contributions to the hurricane relief effort. This, she said, was in addition to in-kind contributions.

“The campaign was successful, and of course, for us at United Way, rehabilitation and restoration are areas which we focus on in times of disaster,” she said.

Several islands were affected by the hurricanes, which moved across the northern Caribbean leaving a trail of death and destruction. Some of the countries to benefit from the contributions from Jamaica, are Turks and Caicos, Puerto Rico, Dominica, and Haiti.