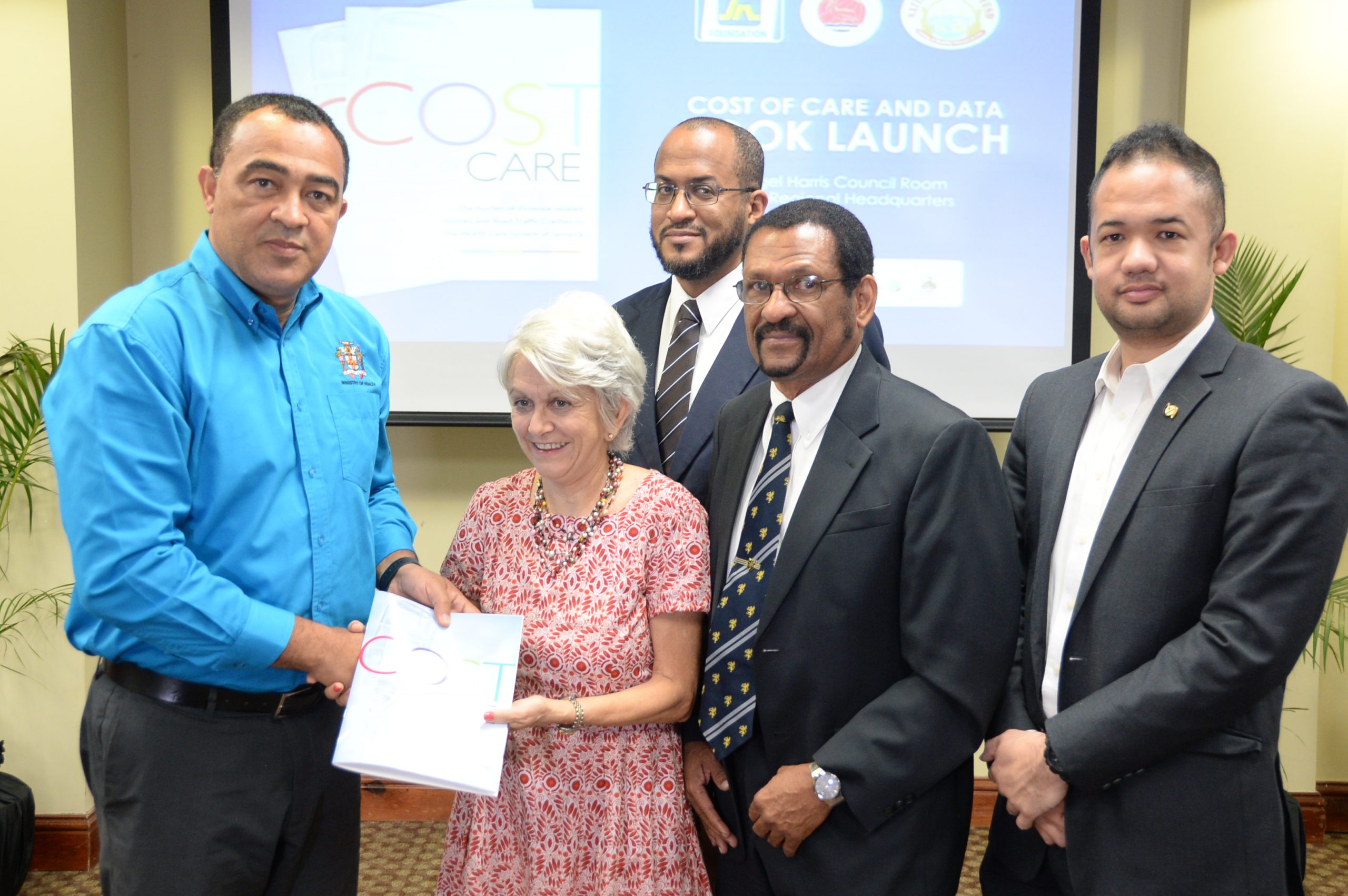 A new report setting out the high cost to the nation’s health system to treat injuries from violence and road fatalities was launched yesterday at the Nigel Harris Council Room, University of West Indies Regional Headquarters in St Andrew.
According to the report — Cost of Care – The Burden of Violence-Related Injuries and Road Traffic Crashes to the Health Care System in Jamaica — showed that an estimated $12.6 billion was spent in 2014 to address violence-related injuries (VRI), road traffic crashes (RTC), as well as attempted suicide.
The study, which investigated the burden of VRIs and RTC to the health-care system in Jamaica, revealed that in 2014, hospitals across the country managed more than 25,000 cases of violence-related injuries, 13,000 road traffic crashes and 500 cases of attempted suicide.
It pointed out that the direct medical cost of VRIs was $3.6 billion and the indirect cost was $5 billion and that the total medical cost of VRIs was some $8.6 billion.
At the same time, the estimated direct medical cost for road traffic crashes was $1.4 billion, and the indirect productivity cost was $1.8 billion, bringing the total direct and indirect medical cost of RTC to $3.2 billion.
For attempted suicide, the direct medical cost was $400 million and the productivity cost was $400 million, resulting in a total direct and indirect medical cost of $800 million.
Dr Elizabeth Ward, one of the lead investigators of the study and chairman of the Violence Prevention Alliance, said that the study underscores the financial impact that violence-related injuries and road traffic crashes were having on the health sector.
“As a country, we need to develop new strategies to reduce these injuries. We need to have a multi-sectoral approach, involving both government and non-governmental organisations and all aspects of health, education, security, youth development, housing and business development,” she noted.
The study was conducted by the Violence Prevention Alliance (VPA), The University of the West Indies, the University Hospital of the West Indies and the Mona GeoInformatics Institute. It was funded by the JN Foundation and the National Health Fund.
Parris Lyew-Ayee Jr, director, JN Foundation, said the organisation, a member of The Jamaica National Group, welcomed the opportunity to co-fund this research project because of its significance to citizens in the society, and the fact that it is consistent with one of the long-term objections of the foundation, which is to: enhance the health, safety and medical care of all Jamaicans.
“I am positive that the research will provide us with useful data, which will be adequately used to educate our young people and adults, pedestrians and motorists how, through better road use, everyone can contribute to reducing patient cost in hospitals across our country,” he said.
Everton Anderson, chief executive officer of the National Health Fund, said that the agency was equally happy to co-fund the research, which has provided quality data that will inform the Government and the health sector.
According to the report, the average cost to treat a VRI from gunshot wounds is $400,000; stab wounds and lacerations $190,000; and blunt injury, $120,000.
For RTC, the average cost to treat a motorcyclist was $260,000; for pedestrians $170,000; pedal cyclists, $120,000; and $94, 000 for passengers travelling in a car.
VPA director William Mahfood noted that the country’s expenditure on VRI and RTC amounts to almost 50 per cent of the revenue of the Wisynco Group, which he heads.
“It is a huge amount of money, and we can no longer as a country allow these issues to keep building and building. Problems like this, we have to deal with them head-on. I know that there are a number of initiatives that the Government is undertaking,” Mahfood said.
“At the end of the day the combined effect on GDP of these two areas is about two per cent, so if we want to get growth in Jamaica we need to deal with the impact of, one the cultural change in the way people drive,” he continued.
Heath Minister Dr Christopher Tufton, who was quick to point out that the data revealed the burden on society from trauma-related cases link VRI and RTC, said persons will now appreciate in a substantial way the impact of this particular type of trauma.