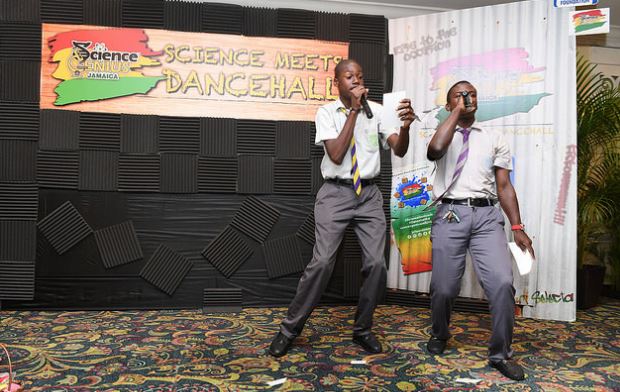 If the organisers of Science Genius Jamaica: Science Meets Dancehall realise their vision, Jamaica will shortly become a production hub for some of the world’s greatest scientists.
Through a partnership between the Jamaica National Foundation and Science Genius — a US-based initiative that uses hip-hop music to reach students, the programme was launched Wednesday at the Knutsford Court Hotel with an aim to “create a buzz about science among high school students”. It will use dancehall music to educate and generate interest in science, technology, engineering and mathematics (STEM) subjects in Jamaica.
According to Dr Renee Rattray, senior manager of learning, development, and culture at the JN Group, this will be implemented in the form of a competition in which students from across the island will vie for the opportunity to be named Science Genius of Jamaica.
“It’s JN Foundation’s latest education initiative. We’re about changing paradigms and shifting things up and this is a part of the education revolution. We’re wanting to turn the whole notion of science and mathematics being hard and being something that students cannot relate to, to something that is easy, and we figured that pairing music with that would be one of the best ways to do this,” Dr Rattray told the Jamaica Observer on Wednesday.