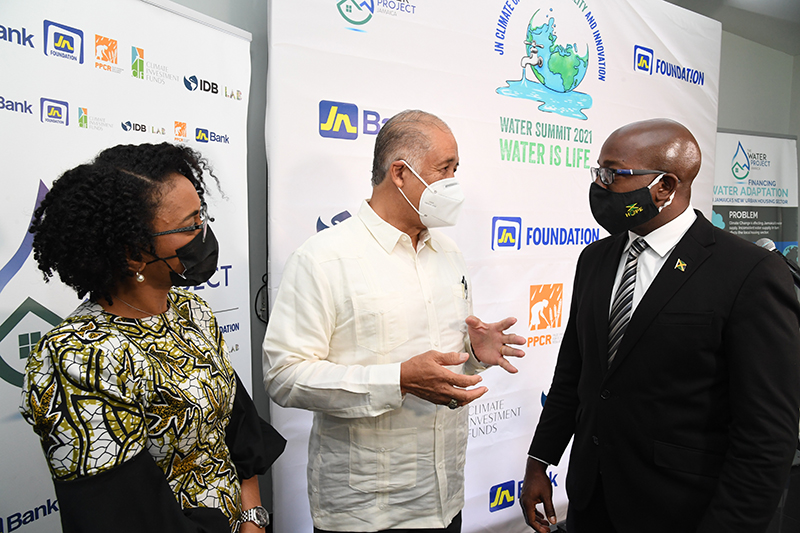 Parris Lyew-Ayee (centre), chairman of the JN Foundation, makes a point to Pearnel Charles Jr. (right), Minister of Housing, Urban Renewal, Environment and Climate Change at the media launch of the Water Summit. Looking on is Claudine Allen, general manager of the JN Foundation.

Parris Lyew-Ayee, Chairman of the JN Foundation, said that the country’s water problems can only be addressed with a collaborative approach, with the input of key stakeholders, at the public and private sector levels.

“Solving this long-standing water problem is not an easy task,” he said. “The government cannot do it alone. That is why we are hosting this special webinar, to bring together in one place: experts, scientists, engineers, hydrogeologists, economists, financiers, policy makers, and social scientists; including many other stakeholders, to not only discuss issues, but to have constructive dialogue and put forward practical solutions, which we will need to grab and put into action,” he explained.

Mr Lyew-Ayee made those suggestions while addressing the JN Foundation Water Summit, which was held virtually on May 13-14, under the theme “Water is Life.”

The JN Foundation Chairman said that the country’s water challenges are unprecedented, which called for decisive actions and proactive approaches to address the issues.

“Our climate adaptation approach must involve the practices of water efficiencies and conservation,” he pointed out, noting that the summit had brought to the table the relevant stakeholders to discuss water related issues.

The geologist also recommended that upcoming housing solutions, constructed by private developers and government agencies, should feature climate resilience and water conservation fittings, as well as systems, at a minimum standard.

He said there should be an urgent ratification of the draft National Housing Policy, specifically in the areas, which aim to support and promote sustainable climate resilience.

The Hon. Pearnel Charles Jr., Minister of Housing, Urban Renewal, Environment and Climate Change, said the government was pursuing solutions to address informal communities, which are vulnerable to climate change.

“My ministry is currently engaged in a comprehensive national survey of these informal settlements, with a view to obtaining information which will allow us to move toward solutions,” he said.

Minister Charles said that, so far, some 25,202 persons were surveyed in more than 219 settlements, which were conducted in the parishes of Clarendon, St Ann, Manchester, Trelawney, Hanover, and St Elizabeth. He also noted that, currently data is being collected in the parishes of St Mary, Portland, and St Thomas.

“That data which is being collected will also inform the Squatter Management Policy, to provide that strategic direction needed to address squatting, with the aim of also addressing the practice and fostering orderly planned development of our land resources,” he said.