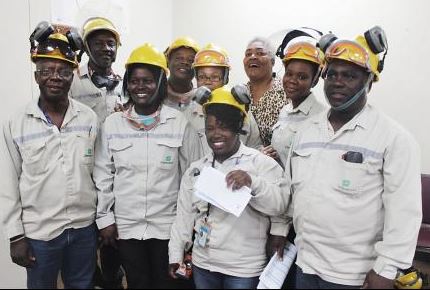 It was a record year for the employees at the Jamalco Refinery who volunteered on various company-organised community development projects. In total, the volunteers gave approximately 10,800 hours of service to communities in 2016.

Manager of corporate services at Jamalco, DonnaMarie Brooks-Gordon, congratulated the volunteers for giving of their time and energy, which led to a record year for the number of employees participating in community-based projects.

As a result of their efforts, 20 schools and community-based institutions received grants totalling J$4.7 million from the Noble Foundation and Jamalco at the launch of its 2017 volunteer programme, held at the company’s refinery recently. The projects were successfully undertaken by 149 Jamalco volunteers who had to give a minimum of 50 hours of service to qualify for the US$250 grant each. Twelve educational institutions, a children’s home, a past students’ association, a church outreach programme, a youth club and a community service organisation for youth were among the recipients. The majority of projects undertaken involved construction and refurbishing, painting and beautification.

First-time Good Deeds volunteer Nichelle Mighten told Rural Xpress that she decided to volunteer with the New Harbour II Citizens’ Association. “I had just completed my exams and had some free time and energy, and I wanted to make use of it in a positive way. The funds will help the association to purchase well-needed playground equipment, assist with organising its upcoming Health Fiesta and other upcoming projects.”

One of the beneficiaries, Monica Smiley, principal of Race Course Primary and Infant School, said she is eternally grateful to Jamalco for selecting her school. “I also want to thank the volunteer wholeheartedly, because there has been no other individual who has taken an interest in assisting our school in such an outstanding way, and you can be sure that this donation will go a far way in helping to upgrade our school,” said the principal.