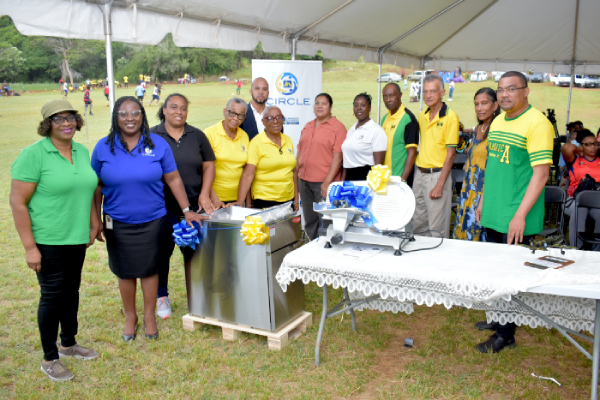 The community of Cross Keys in southern Manchester is poised to boost its agro-processing facility following the donation of critical equipment that will aid in expanding the production of plantain chips and creating employment for the community.

The two pieces of equipment include a deep fryer and commercial slicer, were donated by the JN Foundation through the JN Circle and presented to the community, recently.

Smeadly Reid, chairman of the Cross Keys Development Area Committee said that the agro-processing facility has been in operation since 2016 where it has been producing plantain chips, but due to challenges with the equipment, production fell.

Mr Reid informed that farmers in neighbouring Manchester communities, such as Woodland, Resort, Cocoa Walk and Porus will also benefit.

Mr Reid disclosed that the facility will also be able to diversify to produce cassava and sweet potato chips.

The JN Foundation also presented a pavilion stand where members of the community can be comfortably seated when watching sports and other community activities. Mr Reid noted that residents from four communities, comprising 25 districts, utilise the facility, which hosts community sporting leagues annually.

“The pavilion stand has begun to be impactful as it is now being used by community members who comfortably watch sporting events,” he said. “In that regard, the potential is great. We know that many persons will find it more comfortable to be spectators for the sporting activities.”

Alethia Peart, business relationship and sales manager at JN Bank, Mandeville who handed over the equipment said The Jamaica National Group through the JN Foundation was happy to be presenting the equipment as the organisation was very keen on community development and enhancing lives.

“We are very happy to be involved in presenting the equipment and erecting the grandstand. At the JN Group, we pride ourselves in saying that ‘we put people first’,” she said.

“It is not just about today. This is a sustainable project. We are very happy to see community members enjoying the use of the grand stand and they are able to sit and enjoy the football game,” she said.

The facility was recommended for funding by the JN Circle Mandeville chapter. The JN Circle is a network of JN members and customers in the member companies of the JN Group, who form friendships to enrich their lives through community building, advocacy and networking.

The JN Foundation last year issued a call to JN Circle chapters for submission of community building project proposals, offering grant funding of up to $1.5 million. Dawnette Pryce-Thompson, project coordinator at the JN Foundation said that the organisation was pleased to be investing in the community in a sustainable way.

“The impact of this project will be seen in the very near future as it will provide employment within the community and build comradery among community members. The JN Foundation is happy to be impacting lives in this way,” she said.