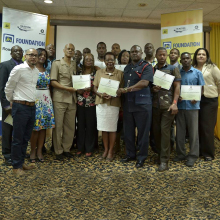 Jamaica National (JN) Foundation launched its First Responders Programme at Cardiff Hotel in Runaway Bay, St Ann, with the certification and installation of the first cohort of 14 volunteers in the field.

The programme, conceptualised by JN Foundation and the Jamaica Automobile Association (JAA), has as its main objective, minimising loss of lives among crash victims, has received support from Jamaica Constabulary Force, Jamaica Fire Brigade, Action for Road safety and St John Ambulance, which trained the volunteers.

General manager, JN Foundation, Saffrey Brown said the pilot project is in response to the continuing high number of fatalities caused by road crashes every year. She said JN Foundation and JAA sought to develop an intervention to reduce fatalities and after consultation with Mona GeoInformatics Institute and Dr Parris Lyew Ayee, it was felt the most beneficial corridor to pilot the project would be from St Ann’s Bay to Discovery Bay.

Brown said the aim is to reduce casualties.

“One of the biggest problems we have in terms of road crashes is how people handle with a crash,” she explained. “People panic, they throw them in another car, they paralyse them during transportation, they are not able to stop the bleeding and the haemorrhaging and that sort of thing. So this project really aims to create safer environment once there is a crash, for the care and transportation of crash victims. Our hope is that this reduces the extreme effects of road crashes, that you have fewer fatalities resulting from road crashes because people are handled in a safer way.”

“We are the trainers of the community first responders and we will also be responsible for re-certifying them when their certification elapses within three year,” said Christie Binger.

“St John will be providing ambulance services in relation to this particular pilot initiative; we have assigned one of our ambulances, specially retro-fitted for this particular purpose, given to us as part of upgraded ambulance fleet buy the Japanese government recently, along with a team of highly qualified pre-hospital care personnel which would include emergency medical technicians.”

Meanwhile, Superintendent Dudley Scott of Area Two police headquarters, welcomed the project and urged road users to be more cautious on the road.

“Definitely, we need the responders to assist because too often we hear of people being pronounced dead on arrival at hospital,” Scott noted.