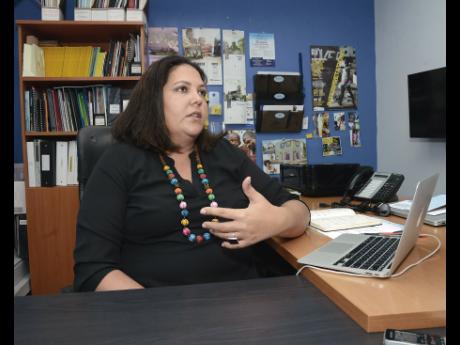 General Manager of Jamaica National Building Society Foundation (JN Foundation) Saffrey Brown has been selected to participate in The International Visitor Leadership Programme (IVLP) this month for three weeks in the United States of America (US).

The IVLP is the US Department of State’s premier professional exchange programme. Through short-term visits to the US, current and emerging foreign leaders in a variety of fields experience the country first-hand and cultivate lasting relationships with their American counterparts. Brown is the only Caribbean representative of the 16 professionals in the batch focusing on change-makers, social enterprises and social entrepreneurs. Participants are nominated and selected annually by the staff at US embassies worldwide and are approved by the State Department staff in Washington, DC.

Social enterprise is definitely Brown’s area as, under her leadership, the JN Foundation launched the Social Enterprise Boost Initiative (SEBI) in 2013, with funding from the United States Agency for International Development. The primary objective of this initiative is to mobilise employment, investment and revenue within communities across Jamaica in a socially responsible manner, and, in so doing, improve the nation’s economic, social and environmental conditions.

“It (being invited) makes me realise that my work is good and people who are interested in the type of work I’m doing recognise the value,” she said. “So from a personal professional perspective, it’s just a reinforcement that I’m on the right track.” Brown, who leaves on Saturday, can’t wait to start networking.

“It was exciting when I realised what the programme was,” she said. “We’re going to five cities across the US, to some really interesting projects.” Brown will be visiting Washington, DC, Boston, Louisville, Seattle and San Francisco. She said she will be asking many questions as we are at a critical stage in social enterprise in Jamaica.

“There are a lot of questions I have, because social enterprise is an emerging field in Jamaica. We’re leading on, but that doesn’t mean we know everything,” she said. “I want to go and see what’s happening in the States. My colleagues, the people that are coming on the trip with me, are all from developing countries, so I also want to know what are the best practices in developing countries.” Other countries in the social enterprise group include Mongolia, Bolivia, South Africa and Zimbabwe.

Trinidad and Tobago-born Brown has been involved in social intervention and community development projects for years, having previously worked at the Kingston Restoration Company after leaving the University of the West Indies, Mona. Brown also had a two-year stint working with housing and regeneration programmes in east London.

“And every time I would come back to Jamaica from my holiday, each project that I had worked on prior … they were closing shop,” she said. “I said to myself, this cannot be the right way to do social interventions because, if you cannot change something permanently, then you really haven’t changed it.” So, when she returned to Jamaica, she felt the social programming being done in the island at the JN Foundation had to focus on the social enterprise model. This led to SEBI’s launch, which has aided and spawned numerous entities, positively affecting the lives of Jamaicans.

After the IVLP period ends, Brown hopes to return with a number of recommendations, ideas and suggestions to propel Jamaica’s social enterprise sector forward. She also wants to forge new partnerships with international entities. She sees benefits not just for the local social enterprise model, but also the wider JN Foundation.

“We are a developmental organisation and I think having access to study visits and seeing what’s happening is hugely important,” she said, noting she will be keeping a blog to record. “We are also going to be doing a lot on corporate social responsibility. Let’s see what the big boys are doing in the US and let’s see what we can apply here.”

Since its inception in 1940, nearly 200,000 distinguished international visitors have participated in the IVLP.