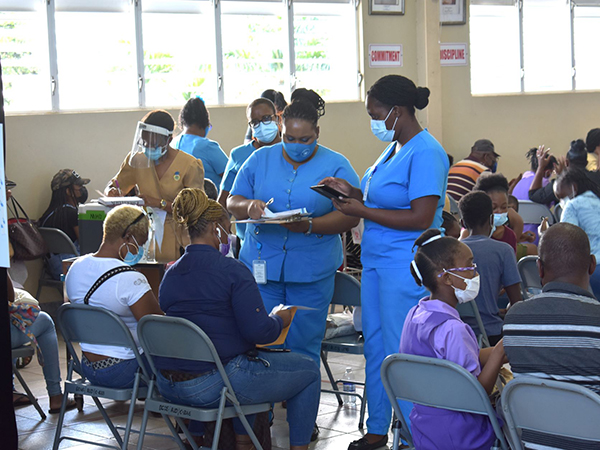 Community health aid workers (in blue) and a public health nurse attend to persons at a vaccination site at the Bishop Gibson High School in Mandeville, Manchester last week. The site was organised by the JN Foundation under its Immunise… Save Lives campaign to encourage more Jamaicans to protect themselves and loved ones from COVID-19. Some 400 people were vaccinated during the Mandeville drive, bringing to nearly 600 the number of people vaccinated in the two drives organised by the Foundation so far under its campaign. The team is in Plowden, Manchester today at the Port Mahoe Seventh-day Adventist Church.
newsNovember 30, 2021

JN Gets Close to 600 Vaccinated, as its Immunisation Drive Rolls into Plowden, Manchester

Close to 600 Jamaicans have now been vaccinated in two immunisation drives organised by the JN Foundation.

The philanthropic arm of the country’s third largest financial conglomerate, The Jamaica National Group, launched its campaign on October 1 with a series of messages on the airwaves, online and via immunisation sites to encourage Jamaicans to protect themselves and loved ones from the disease. There’s also a sweetener of $2,500 on a JN Money card for the first 200 persons monthly who register via jnfoundation.com and upload a photo of their vaccination card until December 31.

“I believe we are reaching Jamaicans and we only hope that the trend will continue as we visit other communities in parishes across the country,” said Claudine Allen, general manager of the JN Foundation.

The organisation commenced its drive with rural communities, given the lower take up of vaccines in parishes outside the Corporate Area. It began in Petersfield, Westmoreland, where some 200 people received a shot of a COVID-19 vaccine, before the team moved on to Mandeville, Manchester, where close to 400 were vaccinated.

The Foundation will remain in Manchester this week, as it provides access to residents of Plowden and surrounding communities to include Little Portmore and Alligator Pond, in the southern region of the parish today, November 30. The vaccination site has been established at the Port Mahoe Seventh-day Adventist Church in Plowden and will be open to the public from 9:00 a.m. to 4:00 p.m.

At the same time, the JN Foundation is also supporting the Ministry of Health and Wellness (MOHW) and a few service organisations with drives in other communities across the country to shore up the number of Jamaicans immunised against the deadly respiratory disease that has now depressed global activity for nearly two years and has killed in excess of 5 million people.

“It’s past time that we get back to higher levels of normalcy. The restrictions we are forced to impose to stop the spread of the disease are seriously eroding our human development, and if we continue, I fear for the world we’ll live in a few years from now,” Miss Allen bemoaned.

“We will continue with our message and our efforts even as we are facing the emergence of a new strain of the virus, because if we don’t, I believe the impact will be worse in the months ahead than it was during the surge of last August and September. I urge everyone to take personal responsibility by doing what they should for their families and their country,” she urged.

After Plowden, the JN Foundation intends to head to Clarendon, where COVID-19 immunisation rates are also woefully low, although the parish has had the fifth highest incidence of the disease since it arrived in Jamaica in March 2020. Only 17.5 per cent of the parish’s population have had at least a dose of a COVID-19 vaccine up to October 31, MOHW stats show.

Miss Allen said Jamaicans can listen out for details about upcoming vaccination drives via the airwaves and from town criers in targeted communities, as well as via email and text messages from the JN Group.