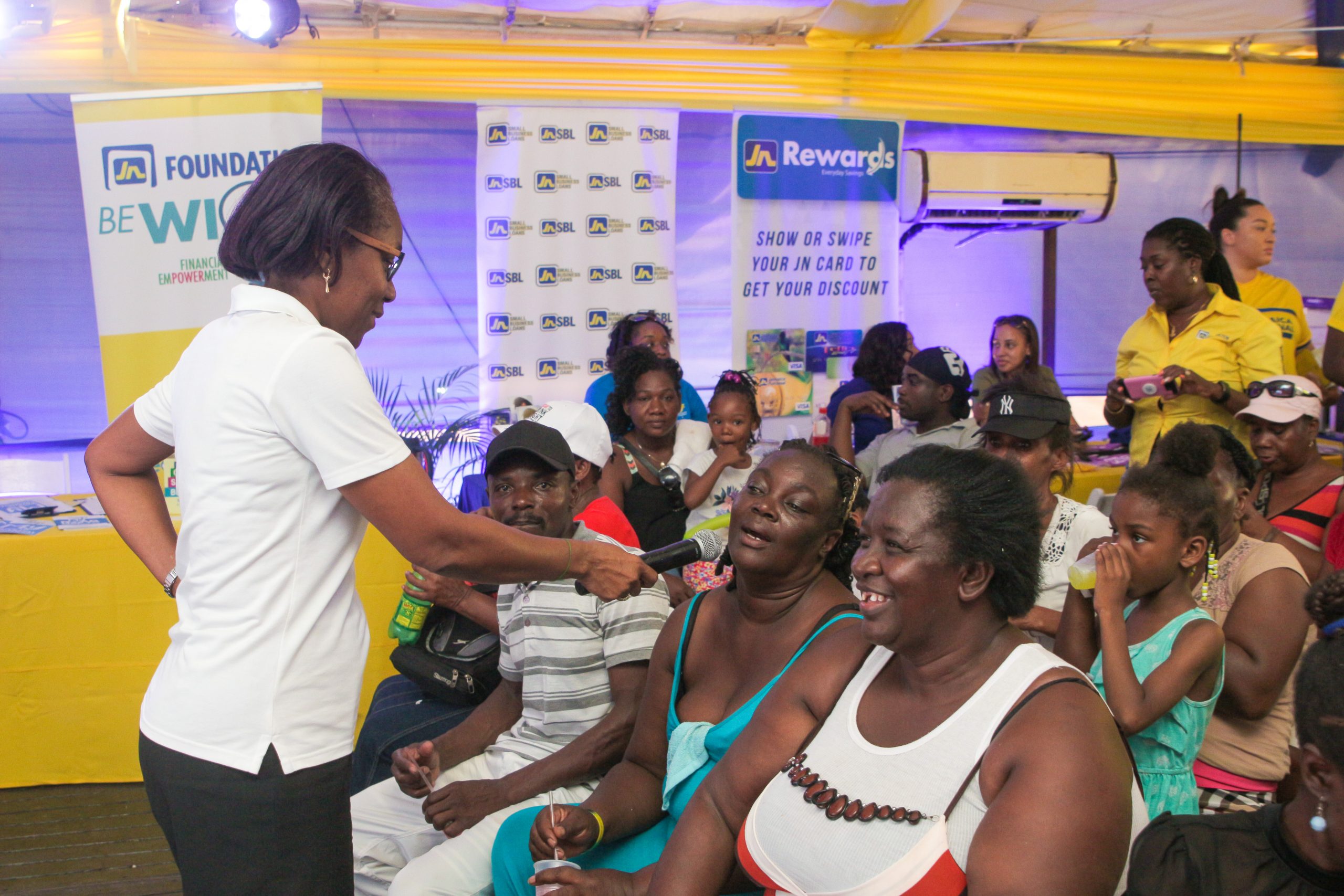 Paula Henry, a member of The Jamaica National Group, for the past five years, was happy that she attended the Bewi$e Programme’s Financial Literacy Seminar, which was held at the JN Bank’s Spanish Town Branch, on July 18.
“I learned that you must save often. If you never saved before, it was time to start,” the mother of seven said, as she reacted to the session which was presented by Rose Miller, grants manager, at the JN Foundation.
Mrs. Miller informed the approximately 20 participants about the value of savings, advising that, “At least 10 per cent of your income should go towards savings, as soon as you receive your pay; and budget the remaining sum for your on-going expenses.”
For Mrs. Paula Henry, the “take away,” was the importance of planning now for one’s retirement.
“I need to start my pension fund because I have not started it yet. I never learned that from anybody. And, I now recognise that JN Bank is really like a family; and I appreciate what I have learned,” she said of the session.
For Wentle Lodge, a JN member who has resided in England for some 30 years; and was on vacation in Jamaica, his “take away lesson,” was how to manage a credit card.
“I always thought having a credit card was like creating a trench of debt and avoided using it. However, Mrs. Miller’s presentation was an eye opener,” he stated.
She advised participants that, “This is money loaned to you by a creditor, to make purchases and pay the bill at a later date. However, you must ensure that you use your card wisely; and pay off your credit card bill in full, on time, and all the time, to avoid paying back interest and racking up a debt you will struggle to repay.

Mrs. Miller also explained that it was important to pick the right credit card, which is suitable for your needs; read and fully understand the terms of the agreement. “Obtaining a credit card helps you to save your money and use money loaned to you; it
is also a good tool in cases of an emergency,” she added.
Mr. Lodge was adamant that he will be bolstering his investment options, as he pointed out that, relying on one’s pension savings only will not guarantee a comfortable standard of living during retirement.

“I personally believe in investment. I have bought properties and I am exploring other business options,” he shared.

Mrs Miller pointed out that The JN’s Be Wise Financial Literacy Project was launched by the JN Foundation, in collaboration with the Inter-American Dialogue in June 2013.Initially, the programme targeted remittance customers, many of whom were unbanked; and, it was subsequently expanded to include other groups, including children.
Using a toolkit designed to debunk the myth that financial independence is a dream attainable by only a few, the workshops promoted the idea that, with knowledge, discipline and commitment, financial independence can be achieved by many.
“The programme was revamped in 2015, and renamed the Financial Empowerment Programme,” she explained, “And since then, it has become one of the most sought after programmes at the JN Foundation, as more people become aware that proper money management is necessary in the quest to achieve their financial goals.”
“We welcome the response from participants, as the programme continues to achieve a high level of success, transforming lives and providing hope, as members embrace their role and responsibility in the quest for financial freedom,” Mrs Miller stated.
Since 2014, it is estimated that some 15,235 persons have benefitted from financial empowerment training.