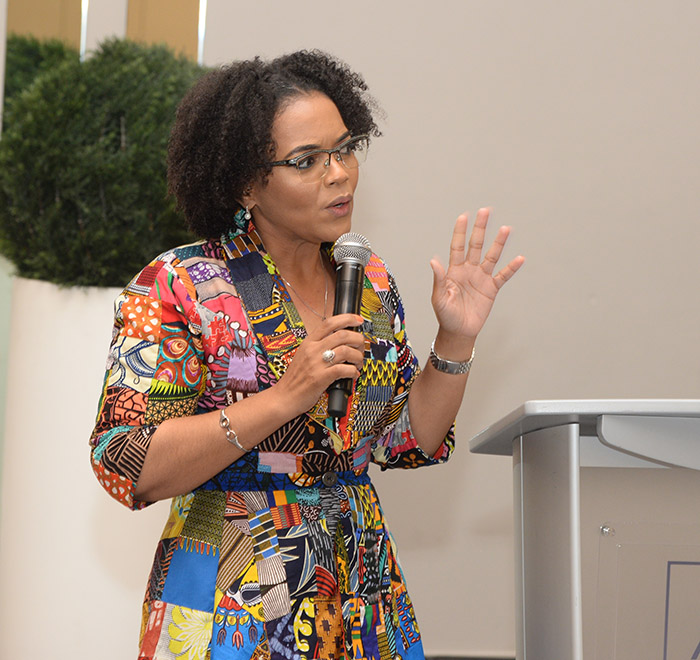 JN Ombudsman Urges Women to be Advocates for the Environment

Claudine Allen, general manager of the JN Foundation and member ombudsman, The Jamaica National Group, is urging more women to assume roles as advocates of the environment, citing their increased vulnerability to climate change.

“What we have found at The JN Group is that the spirit of advocacy that lives in women still thrives, but we need to nurture it some more. We need to encourage women to speak up and say what their truth is regardless of how popular or unpopular it is,” she said.

She was addressing the International Women’s Day Luncheon organised by the United Way of Jamaica under the theme, Gender Equality Today for a Sustainable Tomorrow. The event was held recently at the AC Hotel in Kingston.

She emphasised that climate change is real and affecting the economic livelihood of many persons, but especially  women, who she underscored, are more vulnerable and, therefore, negatively impacted by rising temperatures and their subsequent influence on sea level rise and more extreme and frequent climatic phenomena.

“The statistics over the years have shown that when there are huge natural disasters, the larger the event the more women will die, the greater the difference between the number of male victims than female victims and what that suggests is that most vulnerable groups are women,” she pointed to global statistics.

According to data from the UN, up to 70 per cent of the world’s 1.3 billion poor are women and girls, and 40 per cent of the poorest households in urban spaces are led by single women. They also responsible for up to 80 per cent of food production and own less than 10 per cent of land, which makes them more vulnerable to the effects of climate change globally.

In Jamaica, although marginally more males are considered poor than women, female-headed households are poorer than those headed by men, according to the Planning Institute of Jamaica (PIOJ). Similarly, the Caribbean Policy and Research Institute notes that three in four adults in Jamaica’s poorest communities are women, several of whom are leaders of their households, and their plight has been worsened since the COVID-19 pandemic, which Ms Allen points to as evidence of their worsened vulnerability.

Ms Allen said despite the vulnerabilities experienced by women and girls, their voices are underrepresented, which she said also means that their extensive knowledge of the environment and resource conservation is untapped.

She pointed out that The Jamaica National Group has been encouraging advocacy through the JN Circle- a network of service clubs for JN Members that focuses on building community resilience across the 14 parishes where the clubs are located.

“We launched the JN Circle, and we have 18 JN Circle chapters across the island, and they work together as clubs to create change for something that is happening in their community and we fund it if the proposal is sustainable,” she said.

Through the JN Circle, the members have undertaken projects that build social infrastructure and strengthen community capacity. She said that in this experience, they found the popular notion to be true that women and girls are responsive and become natural champions for community issues.

The JN Foundation general manager informed that these clubs are working to make change in the communities across the island. Some of these advocacy issues include: intimate partner violence; meditation and keeping the peace, among other areas.

She also informed that through the Water Adaptation Project, which was recently concluded, women were integral in being encouraged in the use of water adaptation technologies to address water management issues related to climate change in Jamaica.

The project, which was launched in 2017, is a joint collaboration between the JN Bank, the JN Foundation, the Climate Investment Funds (CIF), the Pilot Programme for Climate Resilience (PPCR) and the Inter-American Development Bank (IDB).