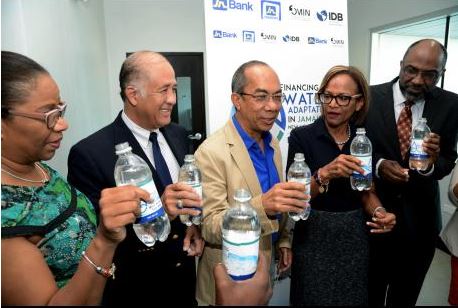 JN Group, through its bank and foundation, will be financing water projects from a $800 million pool of funds that are meant to make the commodity more accessible.

Under an agreement signed Friday with the Inter-American Development Bank, JN Bank Limited will start issuing water loans from a $736 million cache to developers whose water projects include sustainable conservation measures.

JN, which is paying IDB five per cent for the credit pool, says it will on-lend the funds for around 8.5 per cent.

The agreement also includes a grant component valued at $88 million to be managed by JN Foundation.

The programme, which will include a pilot project lasting four years, will target developers for the uptake of the loan facility, and professionals in the construction sector for skills upgrades in techniques identified under the project.

The skills training will be done through state-run agency HEART Trust/NTA.

JN Foundation Saffrey Brown says the four-year pilot is meant to foster a culture of water conservation and innovation in water management.

“The objective of the loan is to facilitate the uptake of water efficiency measures in the housing sector across the country,” Brown said.

“This is also available to small scale developers, so if for example a homeowner has two or three properties and they may want to build for rental, and so on, they will also have access to this facility,” Brown said.

AVENUE TO DO GOOD FOR JA

JN Group CEO Earl Jarrett says apart from the prospect of increased business, JN sees the agreement as avenue to “do good for Jamaica”, in a way that will foster development and better standards of living.

He also called for policy support by way of differential tax rates or other measures that would support the acquisition of water saving devices such as low-flush toilets, guttering and low-flow taps and shower heads.

The signing of the agreement was held at the offices of the JN Financial Centre in Kingston, with representatives from the IDB, JN and the Jamaican government.

Horace Chang, Minister without Portfolio in the Office of the Prime Minister with responsibility for Growth, Water and Development, said he will be exploring measures at the level of Cabinet, which will support water conservation and projects such as the one being rolled out under the JN/IDB partnership.

The technical component of the water adaptation project will be implemented in five phases.

In phase one, JN will focus on developing awareness about the financing available to developers and conduct the pilot project to underscore the cost savings from the implementation of water adaptation measures. Brown says JN Foundation will be focusing on implementation of the pilot over the next six months.

In phase two, JN Bank will on-lend funds to developers and construction companies; and in phase three, JN Foundation will assist with the technical capacity of developers to integrate water adaptation technologies into their housing projects.

The fourth component aims to increase the number of medium and small enterprises supplying climate resilient products that support water adaptation; while the fifth will centre on disseminating the lessons learnt during the project through seminars, expos and other means.

“This project is timely, given the continued experience and effects of climate change across the country,” Brown told Gleaner Business. “And, we expect that it will, over time, yield significant cost savings for homeowners; improve conservation; while increasing the reliability of water supplies,” she said.