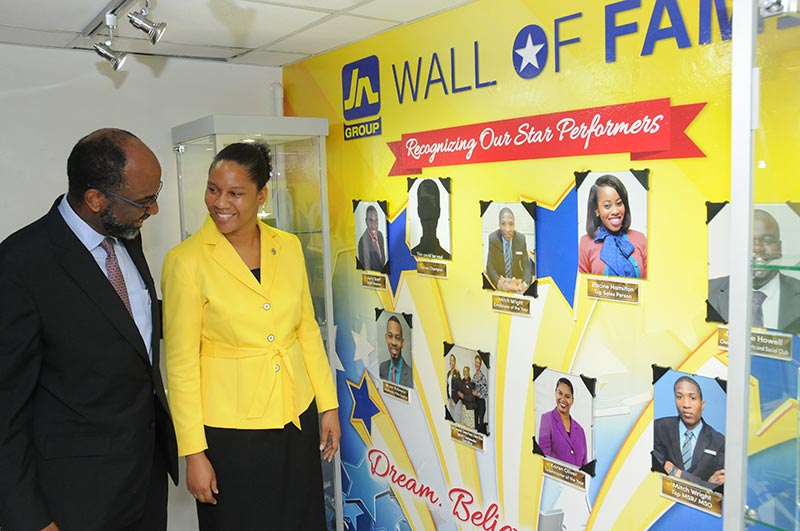 Karen, who has been employed to The Jamaica National Group since 2001, is currently pursuing a Master of Arts degree in Communication for Social and Behaviour Change, at The University of the West Indies (UWI).

“It took a few seconds to sink in, after reading the email, that I was the 2020 JN Foundation Staff Scholarship Recipient.   I’m elated to be selected, because not only will this scholarship help to offset a part of my tuition at The UWI; but the thought that I’m now a JN Foundation Scholar is also very meaningful to me.  I’m really grateful to the Foundation for this wonderful gesture,” she said, as her face lit up with pride.

Karen, who has responsibility for staff and member publications for The Jamaica National Group, is a consistent academic performer. In two consecutive years, 2018 and 2019, she was named the top overall student, in the Department of Communication Studies, at the Northern Caribbean University(NCU).She also received the Director’s Award for academic achievement, East Jamaica Regional Campus of NCU.

Karen attributes her success to hard work and determination. “These are attributes, which I have acquired over the years, and they have contributed to building my character,” she related.

She has also displayed these outstanding achievements on the job; and  she was named the Employee of the Quarter in 2012 for the Corporate Communications department; and was again a nominee for that award in 2014.  In that same year, she was appointed Respect Ambassador, to assist with culture transformation, during the transition of the Jamaica National Building Society to become a commercial bank.

Also, in 2014, she received the inaugural Innovation Award from the Group Human Resource Development department, for initiating and implementing ‘$mart Wid Mi Money’, a unique money management programme for employees.

Tanya Pringle, executive, Corporate Communications at The Jamaica National Group, said she was proud of Karen’s achievements and her consistent high performance on the job.

“Karen is a ‘go getter’ who always excels at whatever task is given to her. She owns her projects and champions them without much supervision. I’m overjoyed at her recent accomplishment”, she said.

In 2016, she achieved the most educational awards (12) in Toastmasters District 81, which comprises 24 Caribbean territories.  From 2014 to 2015, she served Toastmasters International, as one of six Area Governors for Jamaica.

In that same year, she received double recognition on the JN Wall of Fame, which was initiated to acknowledge the outstanding achievements of employees. Karen is a member of the Planning Committee of the Governor-General’s Achievement Awards programme. She is married with two daughters and enjoys speech writing, public speaking, sewing, and gardening.