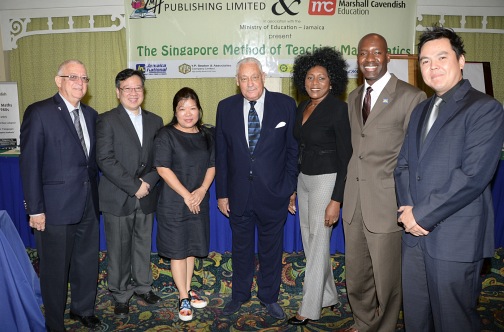 MINISTER of Education Ronald Thwaites says the recent decline in performance in mathematics in the Grade Six Achievement Test (GSAT) points to maths educators’ continued challenge with teaching the subject to students.

Performance in the 2015 sitting of the GSAT declined some 3.7 per cent.

Speaking at the opening of a two-day Jamaica National Building Society (JNBS)-sponsored seminar on The Singapore Method of Teaching Mathematics, Minister Thwaites argued that there is not enough critical thinking taking place in classrooms.

“It wasn’t that we made the test harder or that our children are less bright than they used to be, but rather that the questions were phrased in a way that encouraged critical thinking rather than simply remembering a particular formula or application. This opens the whole door to the methodology of teaching,” Thwaites told the seminar, organised by LMH Publishers and its Singaporean publishing partner, Marshall Cavendish Education.

Thwaites maintained that insufficient maths specialists in schools; poor teaching and teacher qualification remained some of the major factors contributing to the country’s underperformance in mathematics, which he underscored, is critical to the country’s current development pursuit.

According to Minister Thwaites, a significant number of teachers at the primary and secondary levels are unqualified to teach the subject.

“Thirty-five per cent of primary teachers themselves never attained a pass in the Caribbean Secondary School Certificate (CSEC) mathematics and a mere nine per cent of secondary teachers are fully qualified, both as to the content and the methodology, to teach mathematics at Grade 11,” the minister revealed.

“Our census data reveals that of the 1,784 persons teaching maths at the secondary level, 704 have no qualifications in that area, so several secondary schools have no trained mathematics on their staff,” he added.

He noted that although Jamaica spends more on education than Singapore, Jamaica has not experienced the same “proportionate return” as its Asian counterparts.

Jamaica invests some six-and-a-half per cent of gross domestic product (GDP) in education, compared to Singapore which spends three per cent of GDP.

Against this background, Minister Thwaites said the ministry would be spending approximately $300 million to train and deploy 84 maths specialists to coach teachers in the system.

Supporting Minister Thwaites’ position, Gavin Beckford, the executive for marketing, sales and promotions at JNBS, said the teaching of mathematics in Jamaica remains too rigid, forcing students to cram and regurgitate formulas. He noted that although maths is a natural part of the human experience, many people fear it because of experiences in the classroom.

“Many students can’t appreciate how trigonometry and algebra, for example, will ever add value to their lives because there is not enough conversation taking place in the classroom to help them make the connection between maths concepts and their daily lives.”