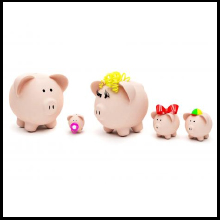 A study has found that microcredit loans make people ‘richer and fatter’ in Jamaica.

Consequently, it can raise the risk of cardiovascular disease (CVD), according to the researchers from the University of West Indies, Mona, and Florida State University, Tallahassee, in the United States.

The study titled Richer but fatter: The unintended consequences of microcredit financing on household health and expenditure in Jamaica was published last year in Tropical Medicine and International Health, a European journal.

It utilised a sample from the database of the Jamaica National Building Society (JNBS), which operates a microcredit arm. The actual study was conducted between December 2007 and September 2008, but it becomes increasingly important with the growth of the micro-loans industry.

The method included matching 726 households of microcredit loan beneficiaries with 726 controls, or non-beneficiaries, by age, sex, and community. Then, the researchers administered a questionnaire to collect data on health and household expenditure. The weight, height, waist circumference and blood pressure measurements were taken for an adult and one child (aged six-16 years) from each household.

Beneficiaries were those who received disbursements under the microfinance scheme for at least two years at the time of the study. The beneficiaries could qualify to borrow between $30,000 and $500,000, stated the study, which the researchers indicated was funded by the JNBS Foundation.

OVERWEIGHT BENEFICIARIES
The findings showed that more male and female beneficiaries were overweight, or obese, but more important, that 17.2 per cent of males (versus 7.1 per cent in the control) and 68.5 per cent of females (versus 63.3 per cent in the female control) exhibited substantially increased risk for CVD. In fact, children of beneficiaries displayed higher mean body mass index for their age than their control peers.

“We support the economic and other developmental benefits of microcredit financing but recommend that health promotion should be incorporated in such schemes to mitigate against a possible increase in CVD risk among beneficiaries. A number of initiatives report success in coupling microcredit with other innovative ideas inclusive of health promotion and education programmes … and money management,” said the researchers.

It is important to note that the beneficiaries’ average annual per capita household expenditure totalled $160,574 while controls (non-beneficiaries) spent $108,578.

The researchers’ review of the published literature revealed a dearth of evidence on the comparative differences in CVD risk between beneficiaries and controls of microcredit finance schemes.

Other authors, they said, have focused on comparing changes in equity and access to health services and other health indicators among communities exposed to microcredit.