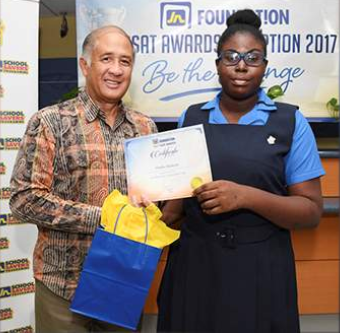 Oralee Jackson is no ordinary child; the 12-year-old has been an avid reader from she was three years old, a pastime that has served her well in becoming a top performer in this year’s Grade Six Achievement Test (GSAT).

Oralee scored 99 per cent both in english language and Communication Task, 98 per cent in science and social studies respectively and 95 per cent in mathematics in the GSAT.

“I studied a lot. I put away my cell phone for three months until my exams were completed,” she said, recalling her routine to prepare for the GSAT exams.

However, her father, Oral Jackson, said her preparation for the “big exams of her life,” was years in training.

“From an early age, she maintained a level of discipline and was always an ‘A’ student,” he said proudly of his only child.

Jackson, who is the area supervisor for the Transport Authority in Westmoreland, said that he and his wife, Sharnett, provided a nurturing environment to allow their daughter to excel.

“When she made mistakes we would correct her, we did not bully her. and I don’t believe in beating, which boosted her confidence,” he explained.

Sponsored Links
6 Jobs That Will Be Gone in 10 Years
BleuBloom.com
5 overlooked low-stress jobs with a 6-figure salary
BleuBloom.com
The Jacksons said that they also played an active role in her schoolwork, as her homework was always checked and signed before it was returned to her teachers.

Describing his emotions when he was informed that his daughter was awarded the JN Bursary, Jackson said: “I knew that she would be rewarded for a work well done, and I am proud of her.”

Oralee was presented with the scholarship at a GSAT Awards reception on Sunday, September 10 at JN Bank in Kingston.

Meanwhile, Sharnett is encouraging parents of prospective GSAT candidates to influence their children to develop the habit of reading.

“Encourage them to read from an early age, as later on it will be to their benefit. Do not wait until Grade six to start the preparation,” she advised.

Oralee, who wants to be a lawyer, had words of advice for GSAT candidates. She is encouraging them to work hard and believe in themselves.

“It is not easy, but when you put in the hard work, you will be rewarded,” she said.

She earned a place at Manning’s School, starting earlier this month. She also commended her teacher, Darnette Campbell of Unity Primary in Savanna-la-Mar, Westmoreland, for preparing her for the GSAT.