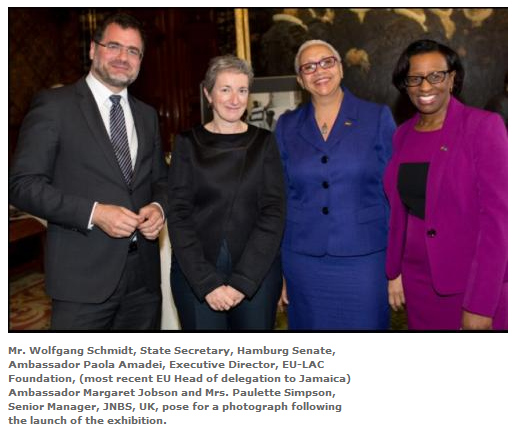 Out of Many, One Jamaica Photo Exhibition in Hamburg

The Jamaica National (JN) Foundation’s photographic exhibition Out of Many, One Jamaica was launched at the Town Hall in Hamburg, Germany, on 25th April 2016. The exhibition is the initiative of the European Union-Latin America and Caribbean (EU-LAC) Foundation, which is headquartered in Hamburg.

The State Secretary of the Hamburg Senate, Mr. Wolfgang Schmidt, and H.E. Margaret Jobson, Ambassador of Jamaica to Germany  brought greetings at the Launch, while Executive Director of the EU-LAC Foundation, former Head of the EU Delegation Office in Jamaica, Ambassador Paola Amadei, and Mrs. Paulette Simpson, Senior Manager of the JN Representative Office, United Kingdom (UK), gave short speeches on the work of their respective Foundations, with Mrs. Simpson focusing on the JN Foundation’s flagship Resolution Project. Guests included representatives of the Consular Corps, the Senate, civil society and the media. Ms. Keisha Witter, Counsellor at the Embassy was also present.

Ambassador Jobson, in her brief address, thanked the State Secretary for hosting the exhibition and commended Ambassador Amadei for her foresight in bringing the exhibition which was previously shown in Brussels, at the Headquarters of the European External Action Service (EEAS), to Hamburg. She also made reference to the partnership between the EU and Jamaica over the past forty (40) years and to the development assistance provided in agriculture, economic management, social development, health and security, among other areas. Special mention was made of the Jamaica National Building Society (JNBS) and JN Foundation for being model corporate citizens.

The Resolution Project has been equipping and training high school students from rural Jamaica in the art of photography, as a creative tool for advocacy, for many years.  From the perspective of the youth, the project highlights positive developments in their communities and also reveals some societal ills. The collection of photographs in the current exhibition touches on complex issues such as gender and identity while others depict everyday life in Jamaican communities – men playing dominoes, schoolboys playing sports in their uniforms and a marching band.

The exhibition, which is featured within the framework of Hamburg’s celebration of European Week 2016, is part of the IV EU-LAC Arts Sessions – Connecting Cultures series.  The display will remain at the Town Hall until 19th May 2016, after which it will be moved to the offices of the EU-LAC Foundation to be showcased at the City of Hamburg’s annual Long Evening of the Consulates, on 26th May 2016. Proceeds from a silent auction coordinated by the EU-LAC Foundation, and in effect until 28th May 2016, will be directed to Jamaican Non-Governmental Organisation (NGO), Eve for Life, which serves women and children living with or affected by HIV/AIDS.

Jamaica National Foundation has mounted similar exhibitions in Belgium, the UK and the USA. The Jamaican Embassy in Berlin also has a permanent exhibition donated by the Foundation to the Embassy at the start of Ambassador Jobson’s tour of duty in November 2013.