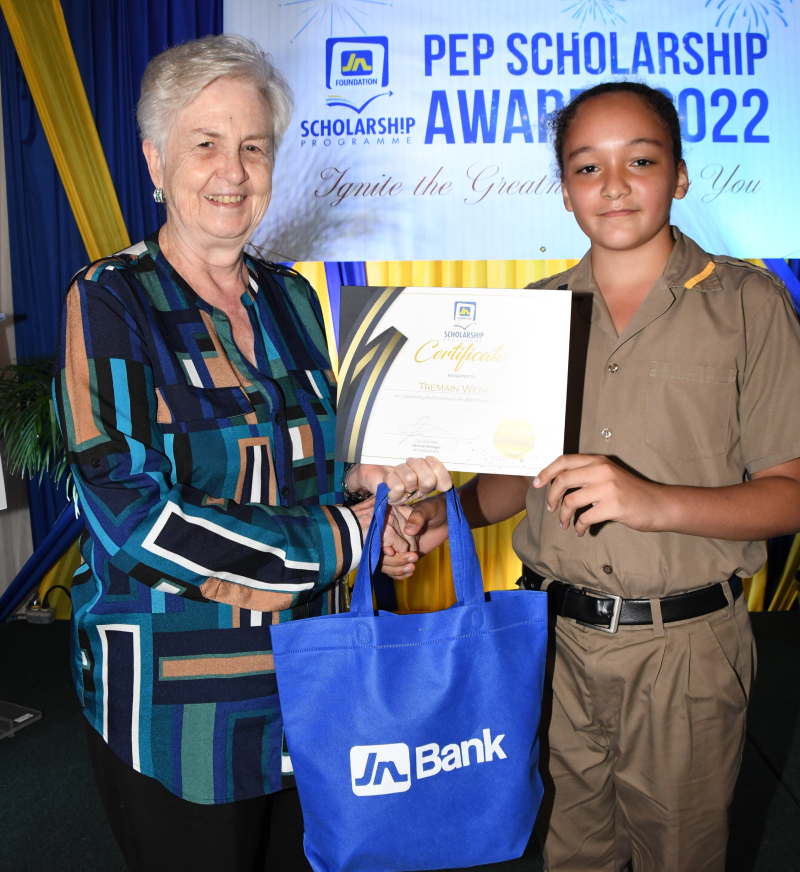 Natalee Minott, mother of JN scholar, Tremain Wenden, is over the moon that both her sons are scholarship recipients of JN Foundation Primary Exit Profile (PEP) Scholarship awards.

Her first son, Trae Wenden, was the scholarship recipient in 2019 for the parish of Portland and now her younger son, Tremain, has also received the award for Portland for 2022.

“When I completed the application, it was minutes to midnight of the same day of the deadline and I said to myself ‘he is not going to get through because it is the last night’ so I was really in shock when I got the call from JN informing me that my son had received the scholarship,” she said.

The single mother of two said that it was the answer to her prayers, as the scholarship will assist with covering the expenses for his education.

“It [the scholarship] really take a lot off me as a single mother,” she said.

For Tremain, his hard work paid off. The future archaeologist said he ensured he went over his notes after each lesson so that he can keep ahead of the class.

The 12 year-old, who is attending Titchfield High School, is aspiring to travel the world one day. “I want to be an archaeologist because I like to explore and travel. I would like to one day visit the forest and jungles,” he said.

His advice to those studying for PEP next year is to go over their notes after each class and not to wait until the time of the exam. Tremain was adjudged highly proficient in all subject areas in the PEP exams.

The soft spoken student, who attended Tranquillity Primary School, and lives in the rural community of Coolshade District in Portland, said his brother played a critical role in his success as he would explain difficult areas of the syllabus that he did not understand.

“Trae (his brother) is like a father figure to his little brother. They are very close,” said Miss Minott, as she described the bond between the bothers.

Giving tips to parents preparing their children for the PEP exams, Miss Minott pointed out that it is important to understand a child’s learning style, as not all children learn through ‘chalk and talk’. Others learn through their environment.

“Sometimes you have to take children outside and teach them through nature or their environment. Make the content relatable. Children also need space as well, it is not just about books,” she said informing that Tremain is an explorer who likes to pull things apart and put it back together.

Tremain is among 47 students who, this year, were awarded JN PEP scholarships and bursaries. Since 1983, The Jamaica National Group has been supporting the educational pursuits of hundreds of young people at both secondary and tertiary levels. The scholarship awards are one of its largest benevolent efforts.