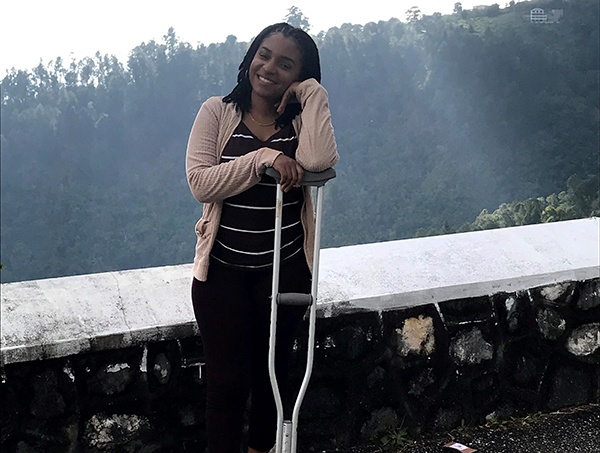 Suewhen Stewart, member service officer at JN Bank, Morant Bay, knows too well how speeding can negatively affect one’s life. She remembers vividly a motor vehicle accident that could have claimed her life and that of her unborn child, three years ago.

“It was a rainy November morning in 2018.  I was in Kingston and fell ill so I took a bus to see my doctor in Morant Bay (St. Thomas). After passing the Cement Company, the bus overturned, it spin about four times on its side”, she shared.  “I jumped through a broken window and saw the conductor under the bus. I was rushed to hospital and placed on bed rest because I was seven months pregnant”.

Stewart informed that the driver of the bus was speeding on that day. Sadly the conductor died from the injuries he received in the crash.

“Speed kills, reduce your speed, especially if the road is wet, if you want to be early, leave early,” she advised.

Another young professional, Yanique Wilson, marketing and communications officer at MC Systems, is happy to be alive today. Three years ago she was seriously injured while travelling in a taxi which was involved in a road crash.

“The accident left my right hand and leg broken. These injuries rendered me helpless and bed ridden for six excruciating months. Today, while I have recovered, I’m left with the mental trauma from the accident and I still do not have full use of my legs,” she disclosed.

Wilson’s words of advice is that everyone has a part to play in reducing the number of crashes on the road. “You don’t have to do anything wrong be a victim, you could be in the right and still be injured so we all have a part to play. This is my plea to you. Do your part, please obey the Road Code,” she said.

The number of people killed in motor vehicle crashes since the start of the year has raced across the 400-mark and now stands at 401, according to the latest statistics provided by the Road Safety Unit (RSU) in the Ministry of Transport and Mining.

The RSU said fatal crashes and fatalities have both increased by four per cent this year when compared to the corresponding period in 2020.

Deidre Hudson-Sinclair, acting director of the Road Safety Unit said that she is saddened that statistics are going in the wrong direction, and note that it is a reflection that Jamaica has a far way to go in terms of education, driver training, safe roads and safe vehicles.

She said, as we observe World Day of Remembrance for Road Traffic Victims,  on Sunday, November 21, 2021, it is a time for reflection and a time to implement strategies that can drive down the number of road crashes.

“My heart goes out to the people who have lost their family members.  Many of them were the bread winners in their family. The best way to honour these victims and their families is to continue the fight against road crashes through road safety education and creating a safer traffic environment for all,” she said

Claudine Allen, general manager at the JN Foundation said road crashes and fatalities continue to be a major problem in Jamaica. She said the economic fallout is great with significant cost to healthcare, productivity and infrastructure.

“Even greater is the loss of lives and limbs and often the permanent incapacitation of many of the road crash victims. The social, financial and emotional effects on families are other areas in which the nation’s people suffer greatly,” she noted.

Miss Allen said many of these crashes are preventable if due care was taken by all road users – motorists, cyclists and pedestrians.

“The appeal must continue until there is a change in the behaviour of all road users.  A greater level of awareness, discipline and courtesy must be displayed by all, then and only then will we see the reduction in road crashes and the resultant injuries and fatalities,” she said.