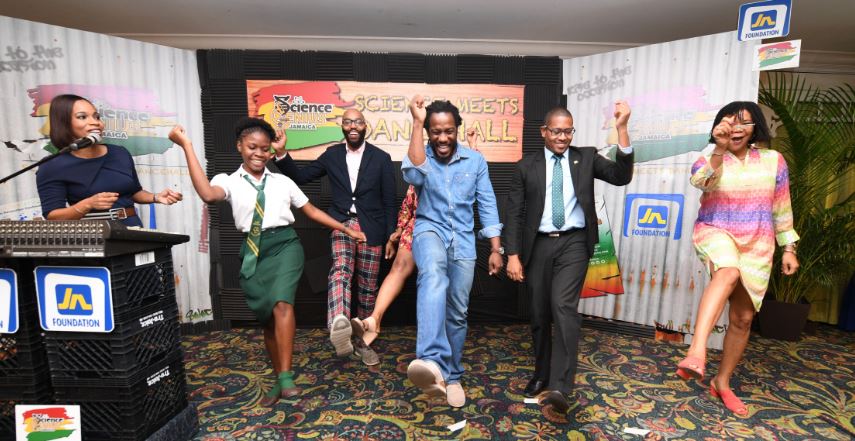 Science Learning Through Dancehall: Revolutionary and Quite Possibly Swaggerific

In July 2016, the JN Foundation produced an exciting School Leadership Summit. It was one of the most lively two days one could imagine, with the tagline Join the Education Revolution! One of the revolutionaries who spoke at the conference was Dr. Christopher Emdin of Columbia University, a science advocate and founder of the #HipHopEd social media movement. Now, he has returned to Jamaica for the launch of the Foundation’s Science Genius Jamaica project. As Dr. Emdin said at last July’s event, quoting an African proverb:
“If the youth are not initiated into the tribe they will burn down the village just to feel its warmth.”
Sadly, I missed the launch of Science Genius Jamaica last week, but here is the JN Foundation’s press release, and some photographs. I am thrilled to hear this has come to fruition and wish the teachers and students every success!

Scientifically Swaggerific! New science/dancehall project aims to improve learning and expand music
Associate Professor of Mathematics and Science at Columbia University, Dr. Christopher Emdin, has pointed to the need for the education system in Jamaica to harness the cultural values of its people to strengthen teaching and learning.
Addressing government ministers, academics, students, corporate Jamaica and dancehall artistes at the launch of the JN Foundation’s Science Genius Jamaica in New Kingston, recently (Feb 22), the urban education expert noted that marginalised people of colour around the globe have come to recognise the value of their cultures in learning and development.
“In many ways we are pushing back against a schooling system and traditions that are a dying colonial imperialism,” he told a receptive audience.
“We are not doing dancehall with science because that seems cool. No. We are in a place where folks who have had their bodies, their minds, their souls incarcerated by a philosophy of age-old times, saying that we are going to reclaim our education by using a culture that is ours that you have told us has no value,” he said.
Pointing to Science Genius Jamaica, which will involve students producing dancehall music using science and mathematical content, he emphasised that the initiative should be seen as an effort to recoup the intellect of people who have been oppressed.
“This is not a celebration of a nice, cute thing. This is a statement about reclaiming our brilliance,” argued Dr. Emdin, who founded Science Genius in the United States, noting that the project has the capacity to reach students often deemed unreachable.
“You say dancehall is only a negative culture and that they, young people, are only interested in bleaching. What happens when you attach dancehall to science is that you are engaging them, because by merging dancehall with science, you are re-training the brains of youth who are embedded in dancehall, to re-imagine themselves as scientists,” he argued, using neuro-science research to support his point.
“We are not just engaging in a cute programme, we are engaging in neuro-scientifically re-wiring our generation!”
Dr Renee Rattray, Senior Manager of Learning, Development and Culture at the Jamaica National Group, who is managing the implementation of Science Genius Jamaica, said the aim of the project is not simply to excite students, but to assist them with the development of their confidence and ability to articulate rigorous science and maths content, given the continued under-performance in the subject.

Citing Ministry of Education data, she explained that Jamaican students have continued to achieve low passes in subjects such as mathematics, chemistry and physics, with a mere 48 per cent of those sitting exams passing maths; 57 per cent, chemistry and 63 per cent, physics.
“The launch of Science Genius Jamaica is not a debate about the pros and cons of dancehall music, but rather an acceptance of its cultural power,” she underscored. “It is a power which we can harness, as Jamaicans, not merely for packaging it, as a product; but something, which we are demonstrating today, that can be used as a tool to speak to our children; and diversify how we teach and assist them to learn.”
Endorsing the project, Minister of State in the Ministry of Education, Youth and Information Floyd Green called the use of culture to reach students “genius.”
“What is undeniable is that dancehall touches us to our core, not only us here in Jamaica, but around the world…,” he said. “If it is so powerful. If it is so impactful, shouldn’t we be using it?” he argued.
Emphasising the need for the country’s deeper involvement in scientific research and innovation to support development, Minister of Energy, Science and Technology, the Hon. Dr Andrew Wheatley, was confident that more students would be drawn to science and mathematics as a result of the project.
“Stopping the downward trend of performance in national CSEC Science is something we are concerned about,” he said. “And as we seek prosperity, in whatever way we define prosperity, it is critical that the sciences are not neglected,” he continued. He congratulated Dr Emdin and the JN Foundation for the initiative to improve the science performance of students.
Saffrey Brown, General Manager of JN Foundation, indicated that Science Genius Jamaica was a continuation of the Foundation’s efforts to support the revolution of education in Jamaica.
“We are living in a Jamaica, and indeed a world, that begs for ‘difference.’ We are using a method of teaching that begs for ‘difference’ and our teachers are charged with molding minds that are ‘different’,” she said, pointing to the need for change to achieve better results.
“We know that the decline of interest in science among students is a worrying trend, therefore, we are doing something about it,” Miss Brown said.
Beyond enriching education, Dr. Emdin, who is also aptly referred to in the US as the Hip-Hop Professor, said the project also has the potential to expand the source of content for dancehall music.
“We are going to change dancehall, not to change the core of it and the beauty of it; but, we want to expand dancehall to make intelligence cool again,” he commented, emphasising that one can achieve a balance between dancehall culture and academia.
“You can be scientifically swaggerific!” he quipped.
“You can imagine a whole new world for yourself that’s beyond the possibilities that anyone else created before you,” he implored students.