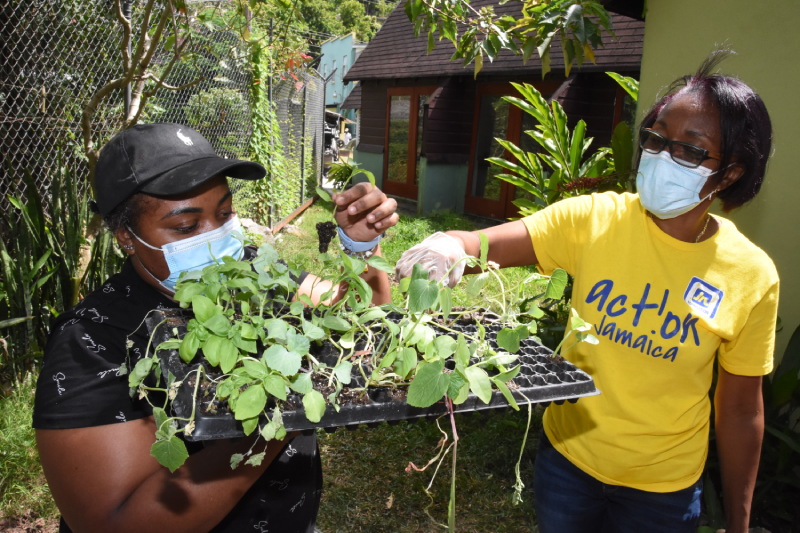 Sophie’s Place Gets Facelift and Vegetable Garden From JN Group

Sophie’s Place, a children’s home for special needs children, benefitted from the planting of a vegetable garden and an infrastructural facelift of its outdoor sensory therapy area by members of The Jamaica National Group on Labour Day.

Chevanese Peters, programme coordinator at the JN Foundation said that The Jamaica National Group has adopted the Mustard Seed Communities and have worked with the organisation for some 17 years.

“Sophie’s Place is one of 11 apostolates that the Mustard Seed Communities has across the island and what they have asked us to do here  is part of a longer project that we have taken on in supporting the organisation, is to revive their sensory area as many of the children have some disability. The sensory area would stimulate them,” she explained.

Ms Peters said the JN Foundation Act!on volunteers painted the sensory area with bright colours. They also created a vegetable garden, where the home will be able to reap from to prepare meals for the children.

Christine Madden-Watson, administrator of Sophie’s Place expressed her gratitude to the volunteers.

Mrs Madden-Watson said that the therapy area deteriorated during the pandemic but with the facelift, the children will greatly benefit. She explained that sensory play helps to build nerve connections to the brain, improving cognitive growth and encouraging children to develop motor skills.

“I just want to say thank you JN and the children and members of staff are appreciative of the work that was done,” she said.

Natassia Lawrence, member service representation at JN Bank who was among the volunteers said she was happy to be involved in the project.

“I love giving back especially to those who are in need of help. It is a very good feeling to see the smile on someone’s face when you give assistance,” she shared.

Sophie’s Place is home to 21 residents including 15 boys and six girls. They have varying disabilities ranging from cerebral palsy to down syndrome.