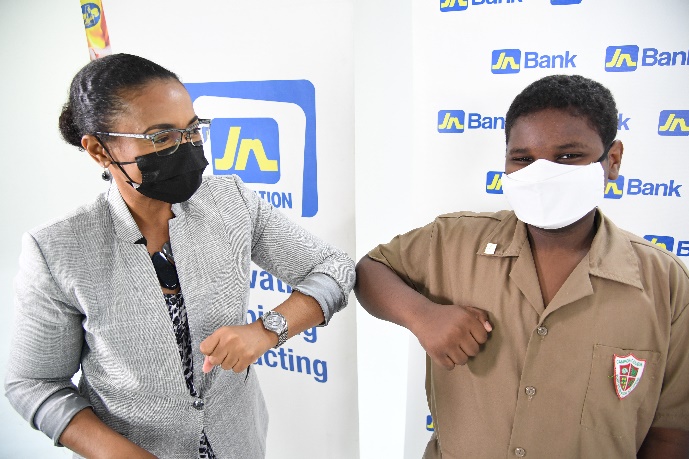 Twelve-year-old Kyle Walker is not easily daunted by obstacles. In fact, despite the challenges he now faces due to the impact the COVID-19 pandemic has had on students and the education sector, Kyle is determined to excel.

The St. Catherine native is a graduate of the Bright Beginnings Educational Centre in Portmore and was recently named the JN Foundation Scholar for his parish.

His persistence to maintain his high academic performance over the years recently paid off with him attaining high scores in the Primary Exit Profile (PEP), which also earned him a place at Campion College, the school of his choice.

“I am really enjoying my time at Campion College, so far. It has been a good experience and I am not intimidated by online learning, even though I do miss face-to-face classes. Most of the topics we’ve been going over, I’ve already learned them, so it’s not really hard and I don’t really have any problems,” he stated.

Kyle admitted that his grades were higher when he attended classes in a face-to-face setting, but said he is determined to maintain his top performance, despite the new way of learning.

He was among 37 top PEP performers across the country, who have been declared JN Foundation Scholars. The cohort consists of one recipient from each parish and county, while 20 are children of employees of The Jamaica National Group.

Approximately 550 scholarship applications were received through the JN Foundation website for this year’s award. As part of the eligibility for the scholarship, the students and their parents must be JN members, customers, or clients of The Jamaica National Group for at least a year.

Kyle attributes his success to the support of his family, especially his father Glenroy Walker, who helped him to prepare for the PEP.

Mr Walker pointed out that his son has always been a diligent student, who has shown great interest in his studies.

“He is also a budding mathematician. He was a semi-finalist and finalist in the Junior Maths Olympiad this year. He also received an honourable mention and finished in the top one percent,” Mr Walker informed.