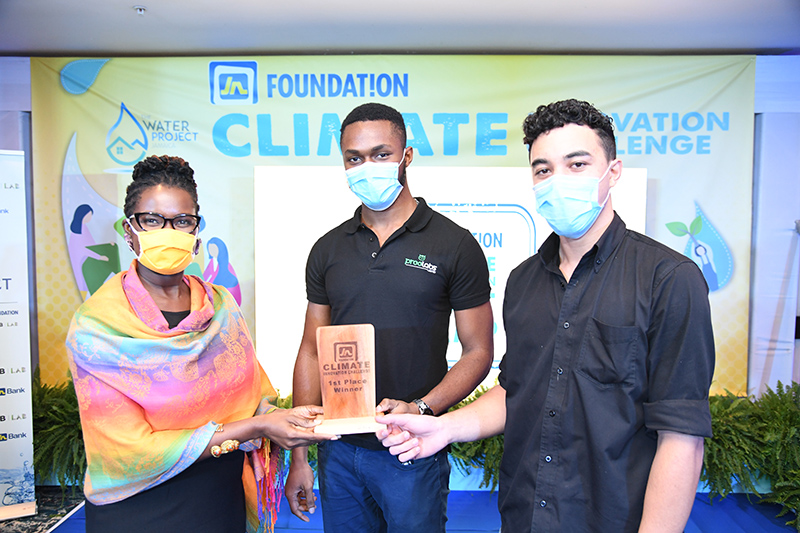 Three start-up companies, Preelabs Limited, Artel and Integrated Recyclers Limited emerged as the top three winners of the JN Climate Innovation Pitch Competition, which was organised by the Water Project Jamaica, which is administered by the JN Foundation.

Preelabs Limited, a technology innovation and product development company, walked away with the first prize of $2 million. PreeLabs emerged from a field of eight contenders with its innovative technology, which allows homeowners and businesses to better understand their water consumption from anywhere in the world; and to be able to detect leaks and shut off the water when not in use.

“We believe this solution – Water Pree, is increasingly important as Jamaica tries to be more client resilient as projections have shown that we are going to be experiencing more droughts. So it is prudent that we find more ways to manage our water resources more efficiently,” said Yekini Wallen-Bryan, chief executive officer of Preelabs Limited.

He said he will be using the prize money to re-invest into the business, so as to increase its capacity; purchase equipment; and enhance its marketing and branding.

Second place went to Artel, whose niche market is to use artificial intelligence (AI) to find solutions to problems. The solution it pitched was to address flood related issues. The company was awarded $800,000 in prizes.

“The Caribbean region is one of the riskiest place to live; and floods from hurricane are common, with more than 5,000 deaths and US$800 million in damages since 1983,” said Tracy Ann Hyman, chief executive officer of Artel. “Hence, against that background, at Artel, we came up with a flood planning and impact tool, which will reduce the damages from flooding and save more lives.”

The company has developed a green Information and Communications Technology flood planning and impact tool, which will assist in determining the number of potential causalities; damage to buildings, roads and infrastructure; as well as, the shortfall which exists, in terms of resources, if a disaster strikes.

“Since 2013, Sargassum has been washing up on our shores from the Caribbean sea, affecting some 19 countries; and costing more than US$6 billion worth of earnings. There is also the problem to remove it, at a cost of approximately US$120 million. We figured, why not use this as a resource to produce animal feed?” said Daveian Morrison, chief executive officer of Integrated Recyclers Limited, during the pitch competition.

Mr Morrison also informed that Jamaica imported more than US$15 million in goat meat each year. Therefore, he is proposing that Jamaica could use the opportunity to improve its herd size, and reduce its import bill.

He said that his company’s business model is to produce the feed, package it as an organic option; and market it to goat farmers, corporations and farming associations.

company, which operates in Old Harbour, St. Catherine, carried out

“Since 2019, we have been on the ground doing our research. I have been a member of the farming association for three years, tuning into the issues, testing them, make it available to farmers and validating it,” he informed.

“We are now delighted to know that JN has come forward to give us new hope through this pitch competition, so that we can take this from 30 per cent where we are at to go further,” he said.

Onyka Barrett Scott, general manager of the JN Foundation said that she was heartened by the quality of innovative ideas which were presented by the contenders in the JN Climate Innovation Pitch Competition.

“This demonstrates how creative we are. The participants not only identified the problems resulting from climate change; but they have come up with real solutions to address the problems,” she pointed out.

She also commended all eight participants; encouraged them to press on, and continue to innovate to emerge with solutions to assist Jamaica and the rest of the Caribbean to adapt to climate change.

Cornelia Walters-Jones, project manager of the Water Project Jamaica, said the competition received some 40 applications for the Pitch Competition, and eight companies were short listed.

All three winners will be hosted for six months to a year, in an incubator or accelerator programmes at the Caribbean Climate Innovation Center in St Andrew.

The objectives of the Water Project Jamaica are to: facilitate the uptake of water adaptation measures in the housing sector throughout Jamaica; and increase climate resilient housing in the country, through greater awareness about the business and financial cases involved in developing and building homes, with water efficient measures.