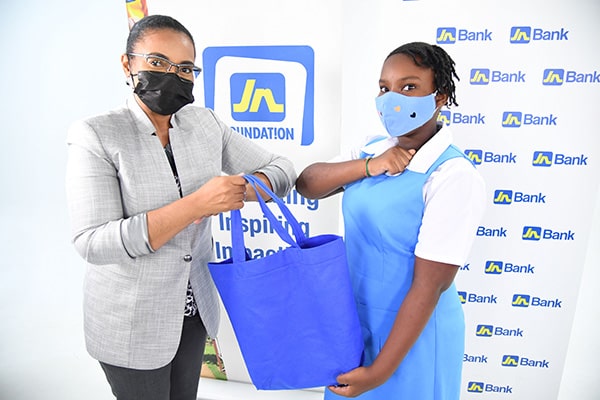 Thirty-seven students who recently matriculated to high schools across the country have been awarded five-year scholarships in recognition of their outstanding performance in this year’s Primary Exit Profile (PEP). The recipients will be formally recognised as JN Scholars during a virtual scholarship reception to be held on Sunday, September 26.

The JN Foundation will award a student from each parish and county, while 20 of the awardees are children of employees of The Jamaica National Group.

This year’s scholarship award is in addition to approximately 100 JN Scholars, who are at various stages in their five-year scholarship, and who will have their awarded amounts renewed for the new school year.

JN Scholarship awardee for the parish of St. Elizabeth, Sydonia Nembhard, said she was overjoyed to be selected for this year’s award.

“I was proud and excited because my mom wouldn’t have to pay for all the expenses,” she related, adding that because she lives far from her new school, the transportation cost would be high.

Sydonia, an honour roll student and the top PEP student at Hopewell Preparatory School, achieved a placement score of 100 in Mental Ability this year and scored 90s in Language Arts and Mathematics, while still in grade four to secure a place at the Hampton School, an all-girl institution, also in St. Elizabeth, which was her school of first choice.

Claudine Allen, General Manager of the JN Foundation, the philanthropic arm of The Jamaica National Group, commended the awardees for their achievement despite the challenges they faced with online learning in a pandemic year.

She pointed out that the annual scholarship awards are part of several sustainable initiatives that are undertaken each year to help persons find a way.

“Our goal is to invest in and empower our children to achieve academic success.  In a few years from now, they will be making a contribution to the development of our country, and we want  them to have the opportunity to begin establishing their leadership skills from early by ensuring that they get a good foundation in their education.  At a time when many parents are having financial challenges in providing the necessities for their children’s education, it was important for us provide that needed support,” Ms Allen said.

Approximately 550 scholarship applications were received through the JN Foundation website for this year’s award.  As part of the eligibility for the scholarship, the students and their parents must be JN members, customer, or clients of The Jamaica National Group for at least a year.

In addition to the PEP scholarship awards, 16 students at the tertiary level, attending The University of the West Indies, the University of Technology, Jamaica, the Northern Caribbean University, and the University College of the Commonwealth, will receive financial assistance to pursue their studies.