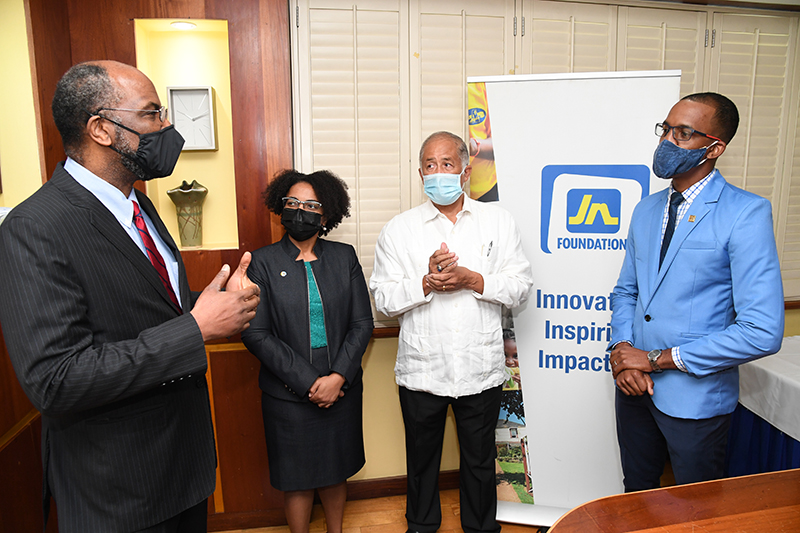 Twenty-five year-old Russell Barrett, who resides in St Elizabeth, is the recipient of the Hon. Oliver Clarke Graduate Scholarship, which was awarded to celebrate the life and legacy of the late chair the board of directors of The Jamaica National Group, a media mogul and Jamaican business stalwart.

Russell, a senior public procurement officer of the Southern Regional Health Authority, said that being selected as the first recipient of the prestigious scholarship was an overwhelming and grateful feeling.

“I’m most thankful and excited. The donor’s name, in which the scholarship is presented, is within itself most prestigious. Mr Clarke has a legacy of his own, and I am proud and honoured to be presented with this scholarship,” Russell said with pride.

He is pursuing a Master of Science Degree in International Public and Development Management, at The University of the West Indies, Mona Campus. He informed that the graduate programme is a sought after course for middle managers.

After completion, Russell hopes to continue to work at his organisation, where he aspires to be promoted to regional director within the next five years.

The Calabar High School old boy said that the scholarship, which is valued up to $2 million, will cover all his educational expenses, a burden which he said has been lifted from his shoulders.

A graduate at The UWI, where he pursued a first degree in International Relations, Russell knows the challenges which go into the financing of an education, as he shared that while doing his first degree, he was not qualified to get financial funding for his studies. However, his parents, who are from humble beginnings, were determined that their first born would get a tertiary education.

“It is from the sweat of their brow that I was able to go to university,” he said, as he revealed that his mother would buy and sell retail clothes, to finance his education, with assistance from his father.

He also worked on campus whenever he had no classes to earn extra cash to cover the shortfall. He noted that these challenges served to mould his character and made him into a thrifty person, who benefited from the value of saving.

“I was a member of the Jamaica National School Savers Club; and therefore, I had a bank account by the time I was 11 years-old,” he boasts.

He said that, with the guidance of his father, he continued saving with the institution; and was able to get a mortgage from the institution, to purchase his first home.

His advice to young people is to aspire to do well and seek higher education. “Hard work and dedication will take you far, but a good education will give you the edge,” he said.

Earl Jarrett, deputy chair and chief executive officer of The Jamaica National Group congratulated Mr Barrett and shared that Mr Clarke was passionate about stamping out corruption and mismanagement of public resources in the public sector and that The Jamaica National Group thought it was fitting to honour his legacy with a scholarship fund that would invest in a generation of young leaders who will not be corrupt and will shout out corruption when they see it and put in good management practices to safeguard against corruption.

Parris Lyew-Ayee, chairman of the JN Foundation said good leadership especially in procurement will be especially needed in the public health sector in the COVID-19 pandemic and post pandemic.

“Leadership procurement to deal with corruption is very important. This is why we are going to need people with backbone, high morals and values to take charge,” he said.

Claudine Allen, general manager of the JN Foundation said that the scholarship was introduced for the first time last year, following the death of Mr Clarke in 2020.

The scholarship offering will be replicated over the next two years and one person is expected to be selected annually.